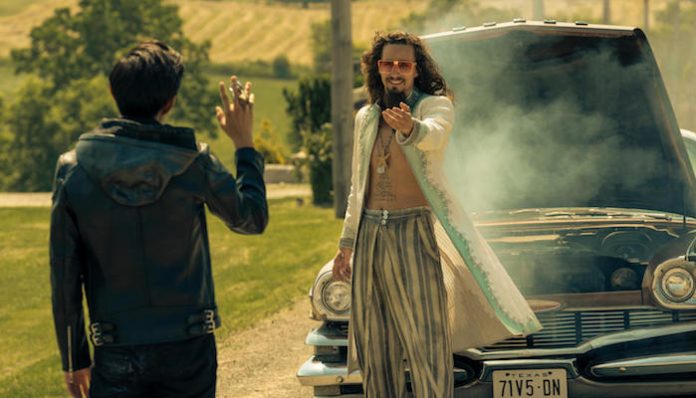 RELATED: ‘The Umbrella Academy’ Season 2 final scene is really sure to get your head spinning

Ben Hargreeves became a fan favorite in the first season of The Umbrella Academy, despite having little agency. That wasn’t his fault, of course. After all, he’s been a ghost for 17 years, relegated to playing the largely ineffective angel on the shoulder of his self-centered, substance-abusing brother Klaus, the only one who can see or hear him. All of that changes in Season 2, accompanied by both smiles and tears.

Despite the claim by Klaus (Robert Sheehan) that “ghosts can’t time travel,” Ben (Justin H. Min) makes the escape with his siblings back through time, to be deposited in 1960 Dallas with Klaus. With Ben’s supernatural assistance, Klaus soon founds a cult — sorry, “alternate spiritual community” — called Destiny’s Children, to whom he spouts the lyrics of, yes, Destiny’s Child and Gloria Gaynor as if they were divine wisdom. As they travel the world, Ben even falls in love with one of Klaus’ followers, a woman named Jill.

Very early in the season, Ben begins to draw boundaries in his relationship with Klaus, refusing to be relegated to the role of parlor trick, and allowing his brother to fall (quite literally) on his face. Ben even convinces Klaus to allow him to possess his body, with certain restrictions (“no touchy-touchy down there”), long enough to enjoy the feeling of grass and soil beneath his feet, and to finally interact with Jill. He even gets to reunite with Diego (David Castañeda), after revealing what he reprogrammed Allison’s Teddy Ruxpin to say when they were kids (answer: “Luther sniffs Dad’s underwear”).

RELATED: ‘The Umbrella Academy’ employed a special kind of secrecy during production of season 2

Unfortunately, however, there’s another apocalypse to stop, caused, again, by Vanya. (“It’s always Vanya,” Klaus observed earlier.) And Ben becomes the hero of the 1963 doomsday.

Vanya (Ellen Page), who arrived in 1963 with no memory of she is, was reunited with her siblings, just in time to be arrested by the FBI on suspicion of being a Soviet spy. Dosed with LSD during interrogation, Vanya regains her memories and her vast store of power; in one version of the timeline, as witnessed by Five in the opening moments of Season 2, the explosion caused by Vanya’s escape, just as President John F. Kennedy’s motorcade passes through Dealey Plaza, is mistaken for Soviet espionage. The president survives, and orders a nuclear retaliation, and, ultimately, the world ends.

But armed with knowledge obtained by Diego from the Commission, the organization that mercilessly preserves the timeline, he, Klaus and Allison (Emmy Raver-Lampman) arrive at the FBI Building in Dallas, only to discover they are unable to withstand the waves of energy emanating from Vanya’s body. That leaves only Ben, whose intangible form can’t be harmed by the forces that killed numerous FBI agents. He enters Vanya’s body, much in the same way he did with Klaus, but instead of controlling her actions, he communicates with her unconscious mind.

It’s a moving moment, as a shaken Vanya, now aware of all of the tragedy she has caused, is consoled by the brother she lost in 2006. With that, Ben’s form begins to disintegrate into glowing blue shards that float toward the sky. “I can’t go with you,” he explains. “It’s not your fault. I’ve been holding on as long as I can in here, but … I died 17 years ago. All of the rest of this … these years with Klaus … It’s all been gravy. At least this time I get to say goodbye.” Asking Vanya to hug him as he goes, he leaves Klaus with a parting gift: The consolation that, although a young Klaus summoned his ghost at the funeral in 2006, Ben remained not because of his brother, but because he was scared to move on.

Although plenty of viewers are no doubt left wiping their eyes, aside from Vanya’s, there are no tears regarding Ben’s sacrifice, likely because Klaus kept his ghostly form a secret for 17 years. Aside from Diego and Vanya’s brief interactions with him, the others said goodbye to him as children, at his funeral, in which they were, naturally, blamed by their father for Ben’s death.