The previously announced guest star is the latest to appear as part of the season’s six new bonus episodes, joining Okea Eme-Akwari (Cobra Kai), James Devoti (American Soul), Lynn Collins (Bosch), and Hilarie Burton Morgan (One Tree Hill). In “One More,” Aaron (Ross Marquand) and Father Gabriel (Seth Gilliam) are put to the ultimate test when they stumble upon a stash for the taking — not knowing it belongs to the madman Mays (Patrick). Spoilers for the episode follow.

When Aaron and Gabriel happen across an undiscovered and seemingly abandoned warehouse, they get drunk on whiskey and stuff themselves with boar meat. With slurred speech, Aaron says Alexandria has to get back to finding and helping people before Gabriel confesses he no longer wants to preach.

Aaron says his judgment is clouded by the Whisperer War and that the skin-wearing Whisperers aren’t most people, but Gabriel tells him: “Evil people aren’t the exception to the rule. They are the rule.”

The next day, Mays reveals himself: he’s armed with a rifle and the mace arm attachment belonging to a now-missing Aaron. Explaining a stack of Bibles with pulled-out pages, Mays tells Gabriel he likes to use the thin pages from the book of God as toilet paper. 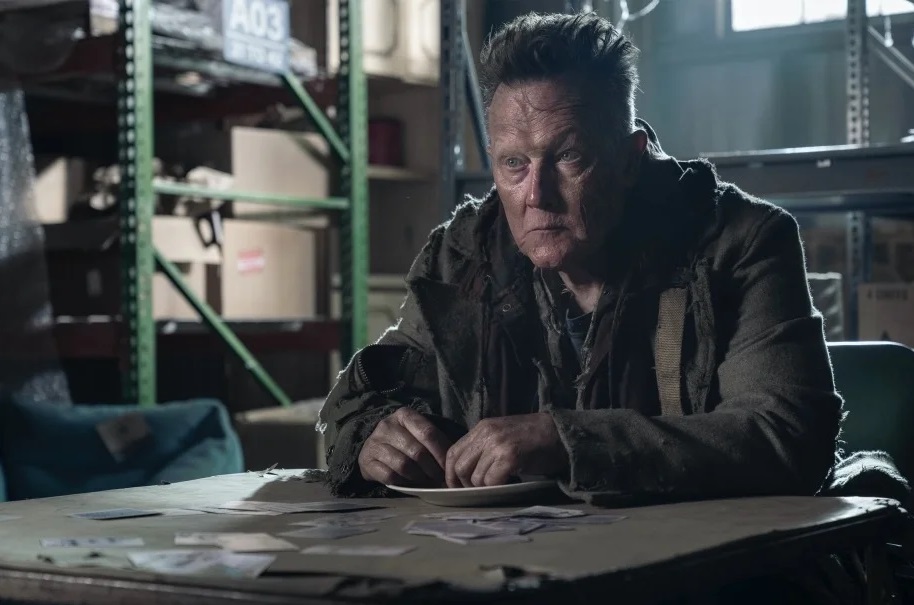 Challenging Gabriel over the conviction of his faith, Mays says there’s “nothing left in this world but thieves and murderers.” When Gabriel pushes back, responding there’s still good in the world, Mays challenges him again and snarls through his scarred face: “Who are you trying to convince, padre? Me or you?”

Seeking “enlightenment,” Mays reveals a tied-up and literally disarmed Aaron. Mays puts one round in a revolver, spins the barrel, and positions Aaron and Gabriel across from one another for a game of Russian roulette with a one-in-six chance of the gun firing: “You’ve got a choice. Each time you can point it at yourself, or the man sitting across from you. Winner goes home.”

Aaron and Gabriel take turns pressing the gun to their heads, flinching when squeezing the trigger and showing relief when hearing the empty click of a bullet not fired. “We’re not thieves and murderers. We don’t kill each other,” Aaron tells Mays. “We protect each other. Like family.”

Mays reveals he had a family — his brother’s — until he was attacked and knifed by his brother over scraps of food. Because of that, Gabriel says, Mays goes on “believing that everyone left is evil or only out for themselves.”

A furious Mays tries to convince Aaron to shoot Gabriel or himself but stops Aaron moments before he can fire the single round into his temple. Mays says this is who people are, but Gabriel tells him he’s wrong: “I was wrong. People in this world are capable of more than just killing each other. They still love, still sacrifice. Your brother didn’t give you any truth, he just betrayed you. And if you punish others for your sins, then you’re no better than him. You weren’t always like this. None of us were. You have to remember who you were.”

The preaching works, and Gabriel convinces Mays he can come home with them and find his way back to who he used to be. When Mays accepts and frees Aaron, Gabriel uses the weapon attached to Aaron’s artificial arm to kill Mays with a single blow to the head.

Gabriel and Aaron search the rest of the warehouse and discover Mays’ twin brother (Patrick) handcuffed in an upstairs area just inches away from rotting corpses that used to be the man’s family. Once he’s set free, the twin lunges for Gabriel’s gun and shoots himself.

More guest stars are still to come as The Walking Dead continues its extended Season 10 with “Splinter” on March 21.