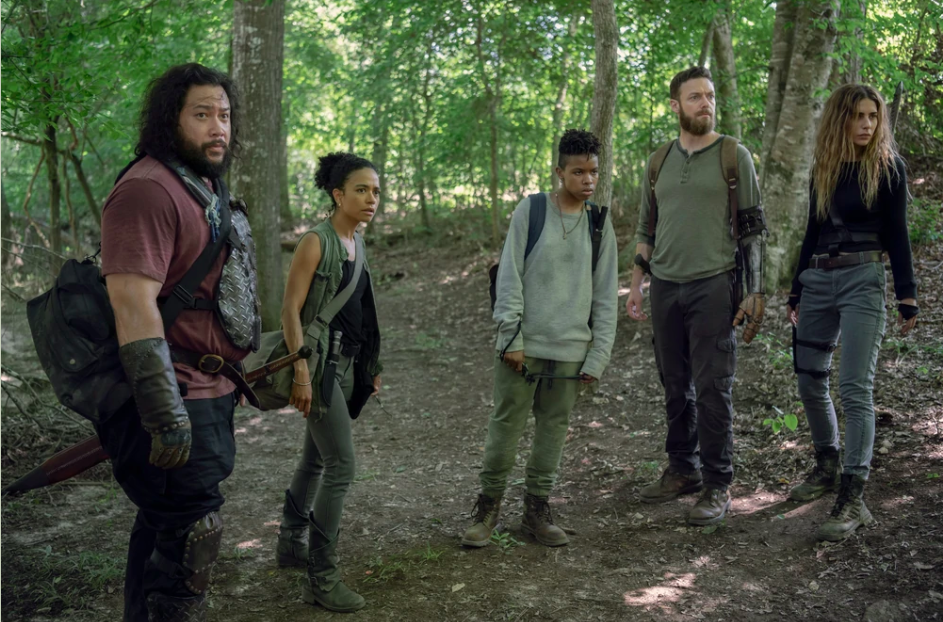 While the cast and crew of AMC‘s The Walking Dead enjoy the response they’ve been getting for the tenth season, life in the franchise’s universe has become a lot like the NFL: neither have off-seasons anymore. With a strong ensemble cast (and a “Big Bad” fronted by Samantha Morton in an award-earning turn as Whisperers leader Alpha) and richly layered writing, showrunner/executive producer Angela Kang did the near-impossible: made the show feel fresh and dangerous again.

With the series set to return to AMC on Sunday, February 23, viewers have already gotten a look at what lies ahead – including Michonne’s (Danai Gurira) return, a shirtless Negan (Jeffrey Dean Morgan), a Eugene (Josh McDermitt)/Rosita (Christian Serratos) kiss, and Morton’s bloody Alpha (check it out here).

Last week saw the release of official key art – highlighting a raging Alpha (Morton), a Michonne who looks afraid/concerned mid-fight, a Daryl (Norman Reedus) who almost appears to be looking for a fight, and a Carol (Melissa McBride) looking to land a mighty “brass knuckle” blow (check that out here). Then as the drumbeats of war grow louder, a new teaser posed a very dire question: Who will rise… and who will fall?

Now with less than three weeks to go before the series’ midseason return, McBride tweeted out some exclusive images (see larger versions above). The first shows Carol, Aaron (Ross Marquand), Connie (Lauren Ridloff), Kelly (Angel Theory), Magna (Nadia Hilker), and Jerry (Cooper Andrews) still looking to find their way out of Alpha’s midseason-ending trap; while the second shows Carol and Daryl at a moment of rest, reflection… and remorse.

But wait! There’s more!! Have you seen this? #TWD https://t.co/DkWzwFdMag pic.twitter.com/FmsbSvI0gV

#TheWalkingDead returns! Feb 23 9pm ET/PT I was told this is an exclusive pic! Is it? Have you seen it anywhere else yet? #TWD #AMC pic.twitter.com/wQEa3qVaNx