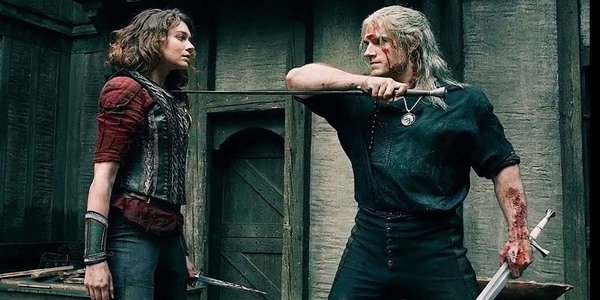 Netflix has released a very small tease for season 2 of The Witcher and it might give us a hint that the show is going to take on one of the book series’ best stories.

The latest teaser for the upcoming season came in the form of the first page from the script of the first episode. There’s a merchant on a cart with his daughter and wife riding along with him. The merchant is worried and for good reason, a shadowy shape leaps out of nowhere and in the blink of an eye kills he and his wife. The girl, now alone, jumps from the cart and runs toward a giant mansion on the hill overlooking the village.

Over all of this Geralt has his typically dark and brooding dialogue addressing some unknown foe. Finally at the end of his voice over he suggest that whatever creature he’s talking to may be something even he is afraid of.

If your first thought was that this doesn’t seem to tell us much, you’re exactly right! But even with the little bit of information we have, this single page does seem pretty similar to one of The Witcher author Andrzej Sapkowski’s best short stories called “A Grain of Truth.” The setups for the stories seem nearly identical, which gives us a good hint that the story might provide the inspiration for the first episode.

In that story, Geralt happens upon a large manor house with a merchant and his wife dead on the road outside. From there the story brings in elements of a classic fairy tale, but inverts them slowly and steadily until you’re left with a different and completely unexpected story. This kind of clever storytelling trickery is something that Sapkowski does best so we won’t spoil anything to keep the surprises intact.

If you decide you can’t wait until the season starts to see where this story goes — or you just want something to compare the episode to — “A Grain of Truth” is the third story in “The Last Wish,” the first book in The Witcher series that Sapkowski published.

Unfortunately, other than this script, we don’t have any clues about how soon The Witcher season 2 may wind up on Netflix. We know the series has had to start and stop its filming thanks to the COVID-19 pandemic, but based on updates from creator Lauren Hissrich, it’s been shooting for the last couple of months and almost near completion. If things went smoothly, expect a trailer and a release date from Netflix sometime in the near future. Season 1 premiered on Dec. 20, 2019.