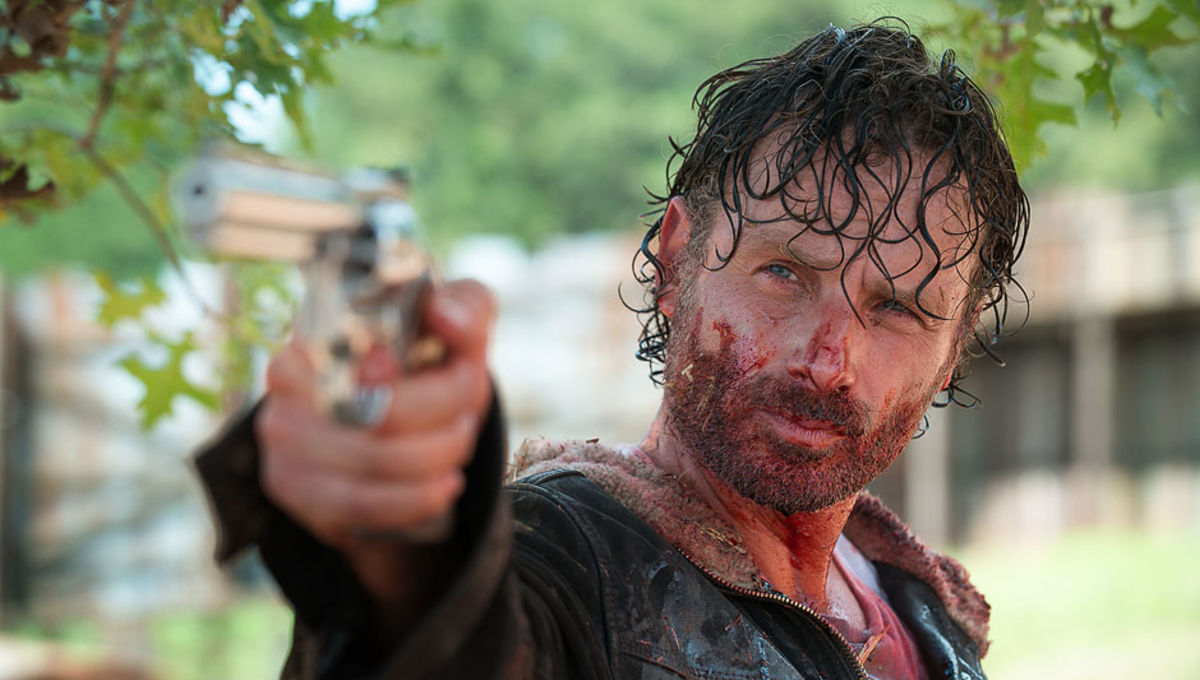 Over the course of nine often torturous seasons, Rick Grimes (Andrew Lincoln) was the de facto leader of the core group of survivors on AMC’s long-running, genre re-defining zombie fest The Walking Dead (now into its tenth season). But trying to keep yourself alive in a post-apocalyptic landscape full of flesh-hungry ghouls and power-hungry humans is no easy feat, and the task can quickly become the sort of slog that could consume one’s soul.

Indeed, the self-imposed crown that more often than not sat atop Rick’s head frequently weighed heavy. While the former sheriff always tried to keep himself and his crew on the side of the righteous, he just as often found himself slipping into the darker recesses of a crumbling world, and dramatically blurring the lines between hero and villain.

One could argue, of course, that the horrific, morally compromised circumstances of The Walking Dead’s zombie-infested world deemed deviation from the righteous path not just inevitable, but occasionally necessary. Unfortunately, when Rick strayed from the path, he tended to drag the members of his makeshift family into the darkness with him. As it happens, one of those morally grey deviations is what led to Rick’s most dastardly act on The Walking Dead.

That act came in the twelfth episode of the series’ mostly fantastic sixth season, “Not Tomorrow Yet.” It was fueled by one of his more damning acts of hubris, with Rick and his inner circle going full mercenary in a preemptive strike against their newfound enemies, the Saviors. The plan was for Rick and a small band of cohorts to attack the Saviors in what was presumed to be their headquarters, eliminate them all, and loot their armory before they find out about Alexandria, the safe zone where Rick and company had been holed up.

Along the way, the “good guys” actually did some pretty bad things, mercilessly killing enemy agents as they slept, with even fan-favorite Glenn (Steven Yeun) getting his hands dirty by taking his first human life. In all practicality, even as things didn’t go exactly as planned, Rick’s dubious plot was basically a success — right up until it wasn’t.

The problem was, in Rick’s haste to lay waste to a legitimately dangerous new enemy, he didn’t do any sort of recon on the Saviors. As it turned out, what Rick thought was the Saviors’ headquarters was just an outpost, and the Saviors’ numbers were far greater than he or anyone else knew.

That fact became obvious in the final moments of the episode, when an ominous voice told Rick he’d made a big mistake, and that two of his closest allies Maggie (Lauren Cohen) and Carol (Melissa McBride) had been captured by the enemy. More than that, Rick’s tragically miscalculated show of force ultimately ended up exposing Alexandria’s soft underbelly, and made a particularly nasty enemy of the Saviors’ ruthless leader Negan (Jeffrey Dean Morgan).

If you’ll recall (and who doesn’t), Negan and his robust crew of baddies took the attack a bit personally, immediately setting their sights on not just punishing the Alexandrians, but wholly bending them to their will. That’s exactly what happened when Rick and his crew found themselves ensnared in a Savior trap, and Negan served up said punishment by brutally bashing in the heads of Glenn and Abraham (Michael Cudlitz).

Any way you cut it, the blood of those beloved characters is all over Rick Grimes’ hands, and one could easily make the case that the relentless bloodshed that eventually accompanied the all-out war with the Saviors can also be pinned on Grimes, as it’s a war that he started by firing the proverbial first shot.

Yes, blindly charging into a bloody conflict with an unknown enemy — and thus getting several of your own people captured or killed — was undoubtedly the worst of Rick’s actions to date. It’s also just one of many questionable tacks that the “Ricktator” took during his time on the show. Whether those on Team Rick want to admit it or not, the on-again, off-again leader of the would-be new world actually broke bad and/or plain dumb with alarming regularity throughout his time on The Walking Dead.

In terms of the “dumb,” a few of Rick’s more head-scratching moments came while trying to free Alexandria from the Saviors. That was when — in a desperate search for allies in the war against Negan’s factions — Rick tried to bolster his numbers by enlisting the help of Jadis (Pollyanna McIntosh) and her Scavengers.

Rick’s decision to carelessly trust the clearly duplicitous junkyard dwellers, even going so far as to help arm them himself, was repaid by a swift and not-so-subtle betrayal that found Jadis claiming the weapons for her own faction while outright refusing to ally with Rick and Alexandria — and then forcing Rick from the junkyard at gunpoint. Even more questionable was Rick’s decision to return to the Scavengers later in the season to try to broker an alternate deal, an act that landed him in a nasty, Thunderdome-style battle with a spiked-out trash zombie.

On the topic of Alexandria’s war with the Saviors, it should be noted that Rick might have put a swifter end to the conflict had he been less willing to negotiate with a clearly uninterested Negan. As a reminder, in the early days of said conflict, Rick actually hatched a solid plan to take down the leaders of the deadly crew by marching right up to the front gates of Savior stronghold the Sanctuary, thus distracting the bad guys from the array of snipers he’d cleverly planted in the surrounding area.

This plan ultimately worked, with Negan himself making an appearance out in the open. All Rick had to do was order the shot, and the Saviors would have lost their fearless leader, and possibly any sense of organization along with him. But no, Rick foolishly tried to broker a surrender instead, a deal that was obviously never going to happen. Things quickly devolved from there, with Rick and company wasting the element of surprise and charging dimly into carnage.

While those decisions hang firmly in the “WTF” category in the Rick Grimes canon, the circumstances of being a leader in the apocalypse led to Rick’s breaking seriously bad on at least one other occasion. This came in one of the series’ most brutal storylines — one that found Rick and his people trapping the cannibalistic Gareth (Andrew J. West) and his Terminus pals in a church, savagely laying waste to each of them as they begged for mercy.

Now, given that Gareth and his buddies had already enslaved Rick and his people with the apparent intention of eating them prior to this showdown, we can sort of understand Rick’s lack of mercy. Still, this remains one of the more grisly moments in the history of Rick’s time on The Walking Dead, one that overshadows even his shockingly cold-blooded (if also somewhat understandable) betrayal of the surrendered Saviors he and Morgan (Lennie James) wantonly slaughtered late in season 9.

Hey, there’s more we could cover here — we haven’t even touched on Rick’s going completely nutso while almost murdering an abusive husband, whose wife he clearly had eyes for, in the streets of Alexandria — but you get the idea. Whether by circumstance or stupidity, Rick Grimes frequently made a case for being the baddest good guy in the history of television. Here’s hoping we get to see a little more of that frustratingly fascinating duplicity before The Walking Dead airs its final episode, or perhaps via that planned Rick-centric Walking Dead movie we’re still waiting to see.