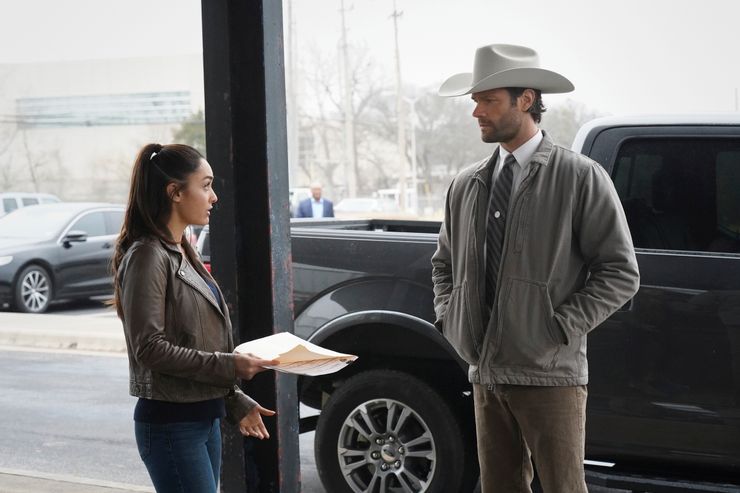 WARNING: The following contains major spoilers for Walker Episode 7, “Tracks,” which aired Thursday on The CW.

While Cordell Walker is unaware exactly how much danger he and his family are in following a series of shocking plot twists, the stakes continue to rise for his colleagues on both sides of the Texas-Mexico border. Here’s a spoiler-filled recap of what happened in Walker Season 1, Episode 7, “Tracks.”

As Walker prepares for a fresh day at work, both of his children have romantic ambitions in full swing. Stella’s fledgling relationship with Trevor is flourishing, while August contemplates asking his friend Ruby to the high school dance. Walker checks in on Micki after the arrest of her mother, Adriana, learning she is being held on suspicion of a DUI hit-and-run. However, Micki believes this is completely false given her mother’s demeanor. In the meantime, Captain Larry James and Liam Walker continue their investigation into Emily’s murder in Mexico, deciding to keep their newly discovered evidence from Walker to avoid him overreacting as usual.

Realizing Ruby is already seeing a boy named Todd, August turns to Trevor for relationship advice as he joins Stella’s soccer team on the road to film it for the school. August confides in Stella’s best friend Isabel, who similarly bares her recent hardship to him over her parents being deported. That night, the teens sneak out to play soccer and drink, as all high schoolers do, where they’re accosted by a local gang that beats up Trevor when he attempts to defend the team.

Micki bails her mother out of jail, but Adriana admits to her daughter that she committed the crime. Still suspicious, Micki and Walker investigate the matter further, speaking with one of Adriana’s patients. They track down a cop named Mike that is secretly dating Adriana, which surprises Micki, who soon accepts that her mother made a mistake and is in a happy relationship. Soon after, Micki and Walker are called into rescuing his kids from the hooligans with Micki’s boyfriend, Trey. Trevor contemplates shooting a gang member in the confusion but decides against it while Walker shows he has grown by refusing to retaliate against a gang banger that threatens his daughter.

Liam and Captain James look into the art gallery linked to Geri’s bar, and the latter scores the phone number of the gallery’s owner. Believing the woman to be interested in him, James is unaware that the gallery curator is well aware he is a Texas Ranger. In reality, Captain James helped convict her father for Emily’s murder. While the investigation appears to be fruitless, they narrowly escape a bombing attempt, destroying James’ car as the duo prepare to leave Mexico.

As August and Isabel grow closer over fireworks launched over the Texas-Mexico border that she can enjoy with her parents on the other side, Trevor accepts a request from Stella to attend the dance with her. August, in the end, decides to go with Isabel. The fireworks trigger a memory for Micki, who visits Adriana. While there, Adriana drops the bombshell that she is not Micki’s biological mother but rather her aunt. Micki’s actual mother, Mercedes, struggled with addiction and was paid off by Adriana to leave Micki in her custody after changing her name from Nina Ruiz. The hit-and-run accident was caused by Mercedes, with Adriana taking the blame to avoid the truth coming to light, thus ending Walker with another bombshell revelation.