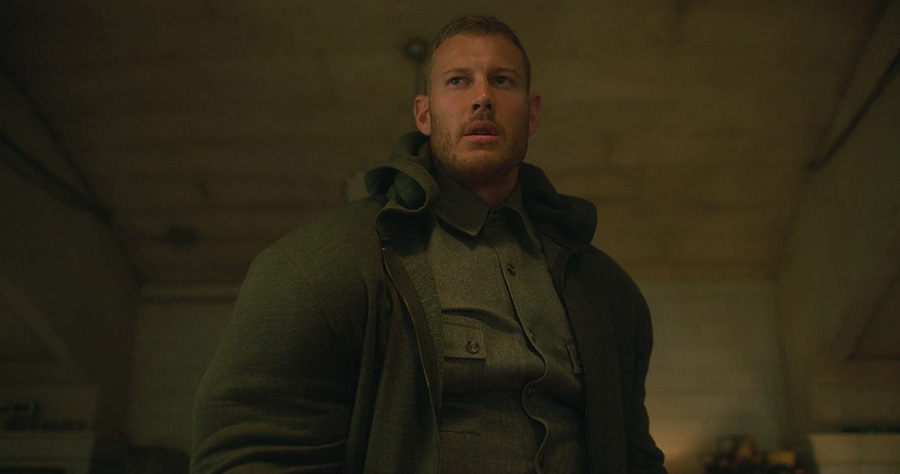 It would seem that The Umbrella Academy’s Number 1 is hardly that among the Netflix show’s increasingly rabid fanbase.

Some of the biggest fans of the series’ inaugural season believe that muscle-bound moon man Luther Hargreeves — the group’s de facto leader — is not just unworthy of that Number 1 title, but may be directly responsible for the apocalyptic events of the season 1 finale. For that matter, he may be even more responsible than his wildly unstable sister, who ultimately brought on the end of days.

As a brief refresher, Luther’s sister Vanya (Ellen Page) is of the adoptive sort, and the pair are two of seven children born under peculiar circumstances and possessed of extraordinary abilities who found a new home with billionaire industrialist Sir Reginald Hargreeves (Colm Feore). Said children were assembled under the same roof in hopes of developing and harnessing their abilities, and molding them into a crime fighting super group. Dubbed “The Umbrella Academy” by their adoptive father, and under the leadership of Luther’s Number 1, that’s exactly what the Hargreeves kids became — all except Vanya, who was deemed ordinary and was not allowed to go on missions.

Following the tragic losses of their brothers Ben and Number 5, the children decided to go their separate ways, leaving Luther (Tom Hopper) on his own to carry the superhero load until his own tragic turn leads to a years-long sojourn on the Moon. When the death of Sir Reginald ultimately gets the super-gang back together, matters quickly spin out of control as a rapidly approaching apocalyptic event spurns the adult Hargreeves clan back into action, with the emergence of Vanya’s untapped and unstable powers eventually serving as the impetus for the end times.

Luther takes point in saving the world from obliteration, but spoiler alert: the gang do not succeed in stopping the apocalypse. Point of fact, they barely escape with their own lives, and Luther’s highly questionable leadership is what has so many fans of The Umbrella Academy throwing shade his way. So, exactly how is Luther to blame for the apocalypse?

First and foremost, Luther’s failure comes down to a matter of blind hubris. Deemed Number 1 at an early age, Luther clearly relished his role as the unquestioned leader of the pack. When the adult Hargreeves have their reunion, he’s often callously dismissive of his family’s input, with his romantic feelings for Allison (Emmy Raver-Lampton) and his bitter rivalry with Diego (David Castañeda) often blurring his judgement. Luther’s feelings for Allison in particular key his most vital misstep after it becomes clear that not only does Vanya have powers, but she may in fact be the most powerful of the Hargreeves kids.

That fact becomes clear in the wake of her near-fatal attack on Allison, an attack that prompts Luther to take the dramatic step of locking Vanya away in a cell. He does so even as his family members beg him to let her out, and try to find a way to help Vanya control her potentially world-ending powers. Luther refuses to listen to reason, and insists Vanya remain caged until… well, he literally had no plan after that. Of course, as Vanya’s powers are directly tied to her emotional state, you can imagine what being locked up does to her psyche. It does, in fact, prove to be the straw that breaks her, and that tragic break sets her on a path of destruction.

With Vanya’s power’s running amok in the harrowing final moments of season 1, The Hargreeves still have a shot at pulling their sister (and therefore the world) back from the brink. The initial plan involves Allison trying to talk Vanya down on her own — a plan that Luther shockingly undermines when he decides Allison will make the perfect distraction for a brute force attack. Again, hubris does not prevail, and Luther’s tragic underestimation of Vanya’s power is what finally dooms mankind to the darkest of fates.

But does Luther really deserve all the hate?

Look, there’s little doubt that Luther shoulders a big part of the blame for the shocking events of The Umbrella Academy’s first season — particularly in regards to, you know, the world actually ending. But let’s be honest, there’s a lot of blame to go around when it comes to the Hargreeves’ fantastic failures in season 1.

Allison in particular played a key role in pushing Vanya over the edge when — after a heartbreaking admission that Sir Reginald forced her to make young Vanya believe she was powerless — Allison actually tried to use the same powers to regain control of Vanya, who quickly freaks out at the news that her own sister played a part in the cover up.

This prompts the aforementioned attack (Vanya straight-up slits her sister’s throat), which ultimately lands her in a cell, and cements her turn to the dark side. Unlike Luther, though, Allison does actually learn from her mistake — which is why she wants to reason with Vanya in those fateful final moments. We know how Luther plays those moments as well, don’t we?

Of course, the big blame for Vanya’s untimely descent into apocalyptic madness really does lay at the feet of her adoptive father. It was Sir Reginald, after all, who first started developing Vanya’s powers, then decided that she was too unstable to train; it was also he who elected to keep the young woman’s powers contained by heavily medicating her, and utilizing Allison’s tricky ability as part of the containment. His choice to not tell any of the other Academy members about Vanya’s untapped strength proved to be a rather boneheaded one, and since we’re casting blame, Sir Reginald’s simian companion Pogo (who knew the secret all along) also played a part in Vanya’s descent.

That being said, if we’re being completely honest, Sir Reginald’s and the Hargreeves kids’ utter failure to include Vanya in their lives in general — even openly shunning her at times — is another obvious reason she was so susceptible to the darkness. The utter isolation that resulted from not being included in any of the Academy’s reindeer games, so to speak, is essentially what led her into the arms of the nefarious ne’er do well Leonard, and it’s why she was initially so apt to trust him instead of her own family.

Of course, it’s worth noting here as well that Vanya herself seems to take a particular pleasure in her newfound powers, and that she chooses not to involve her family in their development until it’s far too late — although, if we’re being honest, it’s tough to blame her.

With so many factors in play, it’s not entirely fair to blame Luther alone for the end of the world — but it’s safe to say he deserves a pretty hefty slice of the blame pie. Hopefully, his continuous failures throughout season 1 of The Umbrella Academy will be used as the groundwork for big changes in season 2.

As far as what lies ahead for the big guy in the upcoming season, it might be helpful to point out while the rest of the Hargreeves clan spent the bulk of the first season trying to put their fractured lives back together, Luther spent it watching his entire life being ripped apart. With any luck, the next season of The Umbrella Academy will find a slightly wiser version of Luther actually listening to the people around him, and maybe even finding a way to save them all from the seemingly unavoidable doom ahead.