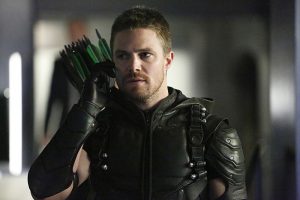 With Arrow‘s eventful, guest-studded, final-season premiere tonight, the road to Crisis on Infinite Earths has begun to look a little clearer. Oliver (Stephen Amell) is on a time-leaping mission from The Monitor (LaMonica Garrett) to save at least his universe — he’s pretty much resigned to his grim fate and poor Earth-2 is no more. That means alternate-universe versions of his loved ones — including mom Moira (Susannah Grant) and bestie-turned-baddie Tommy Merlyn (Colin Donnell) — have evaporated, while escapee Laurel (Katie Cassidy Rodgers) is most likely rejoining our team.

As for which Earth is next, or who will be popping up in the weeks to come, only a few folks know. Thankfully, one of them is Amell. Not-so-thankfully, he’s keeping it close to the leather vest. Still, the star was happy to chat about the experience of wrapping things up and tease a few surprises to come. And, as always, he had a happy excitement in his voice when talking about working with costumed colleagues from Supergirl, Legends of Tomorrow, The Flash, Black Lightning and Batwoman on this year’s massive crossover.

There was so much in this first episode back. How was it for you, basically re-filming your pilot?

Stephen Amell: It was incredible. People don’t get the chance to do that. I felt very lucky that we had a chance to do this because the pilot, to this day, is probably the greatest professional experience of my entire life. Just the circumstance around it. Getting to wear a superhero suit for the first time and all that stuff. So you get to thinking about all the history and to get to play so much of it again? These familiar sets and circumstances? It was just, it was fantastic.

There seemed to be real emotion all over your face in some of these scenes, especially with Susannah Thompson and Colin Donnell. Even John Barrowman, whose Malcolm didn’t seem so evil this time! It was clear that these were important scenes for you to be doing.

No, no, that was 100 percent acting. I hate all of those people. [Laughs] I hope that it’s a testament to our show that people felt comfortable, if not compelled, to come back. I mean, that itself means the world to me. It was just so special. How much have you been in on how this final season is being crafted?

I get into the details of it. They told me [how] the first, second, third, fourth, fifth, sixth and seventh episodes took place. And then once I found that out, then I started to get into it with those particular writers, like “OK, that’s awesome” or “I think it’d be cool if like if these things happen.” Like little things. I’ve been getting into the little details.

You are the gatekeeper of Oliver’s history.

Yeah. Aside from [showrunner] Beth Schwartz and Mark [Guggenheim], who is really involved in the season, I’m almost positive that none of the people [writing the show] were in the room when we started. I have the built-in benefit of remembering things right, having lived them. So yeah, it’s been so fun this year, man. It’s been really hard, but it’s been fun.

And if the premiere is any indication, you guys aren’t holding back.

We’re really going for it this year. I mean, if you’re were going to limp to the finish line, then all of us should have walked away with The Monitor and that could be it. But everyone in the writers room came back, everyone on the crew came back. Everyone that has been asked to come back — to the best of my knowledge — has said yes. To the point where I have read a couple of scripts, specifically Episode 7, which has got the most major character [appearing], and I was like, “Oh, come on. No way.”

Can’t wait! But you’ve got your cast regulars and then all of these guest stars lining up. Does it ever feel kind of crowded for you guys?

No, because it’s really compartmentalized.  This is going to be in some, overly simplified, but each episode is its own episode. [Episode] 4 is a little different. But then [Episodes] 5, 6, and 7 really are their own story. If you imagine the first seven episodes [are heavy action], four is like an emotional intermission. That should be the title of the episode. [Laughs] I get the impression that Oliver’s journey is almost like a Wizard of Oz situation, where you have to go to various different earths or timelines to collect something. And along the way, you’ll also be gathering one other person.

Felicity was mentioned several times in the premiere. What are you guys doing to get Emily Bett Rickards  back?

I think if Emily wants to come back, she can certainly come back. She can write her scene as far as I’m concerned. But I don’t know. I think, regardless, we’ve put a nice cap on her story. As you begin working on the Crisis crossover, how has it been getting everything coordinated? Because, as the Number Ones on the call sheet, you and Melissa Benoist, Grant Gustin, Ruby Rose…you all have to be the quarterbacks for your shows.

It’s been great. I mean, this year more than ever. By definition, we’re talking about, Melissa Grant, me, Caity Lotz and Cress Williams…did I miss anybody? [Laughs] Everybody is a quarterback and wants the best. And do you know what I mean by Day Out of Days? It’s what you call the schedule for an episode. The overall Day Out of Days for our crossovers, physically, is like two pages. This year, it’s like a 55-page booklet.

I’m shooting a scene tonight with Melissa from Supergirl, we’re using the Legends crew and an Arrow director. It should be a lot of fun. Honestly, I hope it’s the most fun. And if you’re a fan of the DC Universe, I hope watching Crisis is the most fun you ever have.

I love how they’re going all out with getting actors not just from the Arrowverse but from the extended DC Universe.

Oh, you have no idea… And I’m sure they’ve got people waiting in the wings we haven’t heard about yet?

Since this is your last month…

Yeah, we wrap on the 13th of November.

How do you feel about Oliver now? He’s had such a great emotional evolution for these last eight seasons. He’s really grown and changed. How would you say he changes in these last 10 episodes?

Well, I mean, we’ll see. How many stages of grief are there?

Five? Well the seven episodes prior to Crisis are like those stages for him. I mean, there’s still lessons to be learned. I think that some of the scenes I get to play once we get past Episode 3 are…you know, we are in our final season and I think I’m getting more chances to break new ground with my character, which is so great and uncommon.

That is great. How much of a break are you going to take before your wrestling show, Heel?

I think we’re going to start filming some time in March but that’s still up in the air a little bit.

That’s a good break. You’ll actually get to recover from all the stunts a little bit.

I’ll be training for wrestling though so, maybe not. [Laughs]