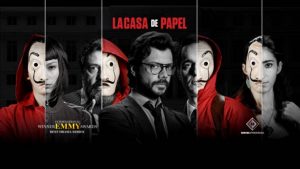 Money Heist, a Spanish series based on the biggest heist lead by Alvaro Morte as the professor of 2.4 billion euros. The cast of the 4th season includes professor, Tokyo, Nairobi, Rio, Raquel, Denver, Monica, Tokyo, Helsinki, Palermo, Bogota, Alicia, and Marsella. The fourth season will be premiered on 3rd April 2020 only on Netflix.

The series is a must-watch since there are rumors about Shahrukh Khan, the Indian television actor brought the copyright of this series. The series is suggested to watch with the Spanish language with English subtitles as an English dub is not an accurate script.

In the first season, we saw police giving up over the investigation of the robbers as the professor and his team were successful in robbing 2.4 million euros and are bound to live their lives happily. In the next season, everyone is enjoying their shares in 2.4euros just when, Rio gets arrested by the police and Professor, and his team reunites to save Rio and perform another Heist. In season 3, Alicia is the new police detective assigned to find the robbers.

Alicia is strong, plays mind-games, breaks the rules to find the people involved in the heist. She basically read the professor’s mind and plans to break him down personally. How personally? By attacking Raquel instead of him. Raquel and Professor have a bond but Alicia made sure that it would not last any longer. While escaping Alicia found Raquel and according to series, she is dead because The professor hears a gunshot. But, no dead proof like Raquel’s body or the moment when she was shot was seen. Therefore, this might be another game plan of Alicia because when it’s about hurting the emotions of people, they act out.

In the next series, the professor will take revenge of Raquel’s death and perform another heist. Reports also claim that an unknown woman might take the robbers down due to some reason. Let’s see what might be the reason on 3rd April only on Netflix.