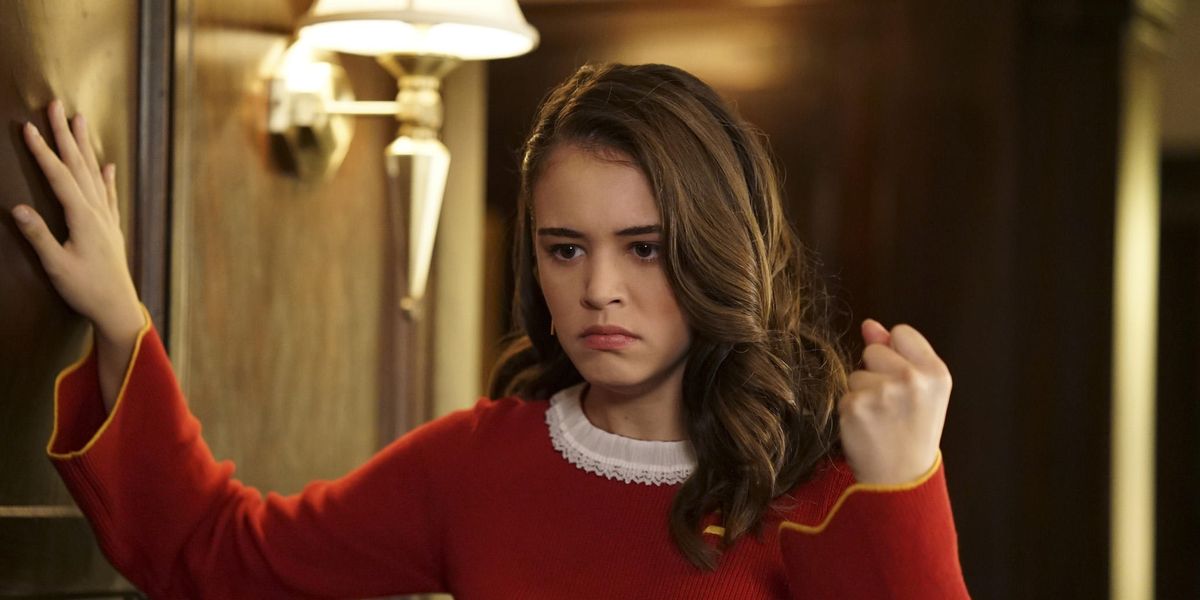 Legacies is about to take a trip down memory lane. In the series’ upcoming episode, “Salvatore: The Musical,” the Salvatore School puts on a musical all about the school’s history. That history includes the story of Elena Gilbert (Nina Dobrev), Stefan and Damon Salvatore (Paul Wesley and Ian Somerhalder), Caroline Forbes (Candice King), Klaus Mikaelson (Joseph Morgan), and many more. And for Legacies’ Kaylee Bryant, it was a chance to put her love of all things Vampire Diaries to use.

EW spoke with Bryant about the hour and the pressure of playing Elena.

KAYLEE BRYANT: Oh, I was so excited! I was so obsessed with The Vampire Diaries, and I’ve watched it so many times. I feel like the past 5-6 years of my life have been in preparation for this. [Laughs] I got super nervous when they told me I was playing Elena. But the more that I realized it was me playing Josie and Josie who was playing Elena, the more I was like, “Oh, this is okay. This makes sense.”

You all nailed the Elena costume.

Yeah, it’s kind of amazing. The costume department, the hair and makeup department, everybody got super inspired and super excited about it. We had pictures everywhere of everybody’s most iconic looks, which involved a lot of pleather as I think we all know, a lot of bootcut legs.

And the layering of the shirts!

Oh my God, I miss it, but at the same time we were doing the “Hello Brother” dance and we got to take 30 and I was like, “Why am I sweating so much?” And I was like, “Oh because I’m wearing three layers of thermals.” [Laughs]

As the TVD expert on the cast, did you find yourself explaining a lot of things to your cast mates?

Oh constantly. My only thing is, and I’m going to regret this for the rest of my life, is that in the opening number I was wearing Elena’s necklace and I kick myself to this day because she shouldn’t have the necklace by then. That’s going to drive me crazy for the rest of my life. You see Elena and just associate the necklace with her but Stefan’s the one that gives it to her and she meets Stefan with it on in the musical and I’m like, “Nooo!”

What was your favorite part of making this episode?

Honestly, the rehearsal process was so much fun. Chris [Lee] and I both come from musical theater backgrounds and I think we both were really missing it at that point, so we actually did full-blown rehearsals in a ballet studio with professional dancers and it was so much fun! We all got to play around and that was genuinely my favorite part of it all.

How long was the rehearsal process?

Well, episodes 1 through 4 are year-long episodes. These episodes took a year to do because we started at this time, if not earlier, last year and finished at the very end of last year. It took a very long time because we got put on hold because of COVID so it was a lengthy process. We did the choreography and the recordings and a few scenes before we all got shut down. It’s almost been worse because then I had an entire year to sit back and go, “I could’ve done all of that so much better.” [Laughs]

What does Josie take away from her time as Elena?

She really takes away a lot. I went through the same process as Josie in that I heard that Josie was playing Elena and I was like, “Why would they do that, they have nothing in common.” And then the more I dug, the more I realized that their over-arching character stories have so much in common, with them deciding what is the right choice for them outside of everybody else. So it’s really interesting how her stepping into Elena really validates what it means to be selfish versus what it means to look after your mental health.

Looking ahead a bit, is she still dealing with the Dark Josie fallout in episodes to come?

Definitely. Josie has been at this school for her entire life and she sees magic very differently than everybody else. She struggles with basically an addiction to magic, and I think that she really comes to terms with that these next couple of episodes. The Salvatore School is completely full of magic so her entire life she’s always been surrounded by the thing that hurts her the most, so she has to take initiative for herself and what is best for her.

Is there a side of Josie you’d like to see more of this season?

The first half of the season following the musical and episode 4, we really dive into Josie actually sticking to her word of not being co-dependent and really finding her own independence, which is something that I had so much fun working on. What’s exciting about this season for me personally is that I do get to work with some new faces, which was really fun to get some fresh blood in here.

Legacies airs Thursdays at 9 p.m. ET on the CW.