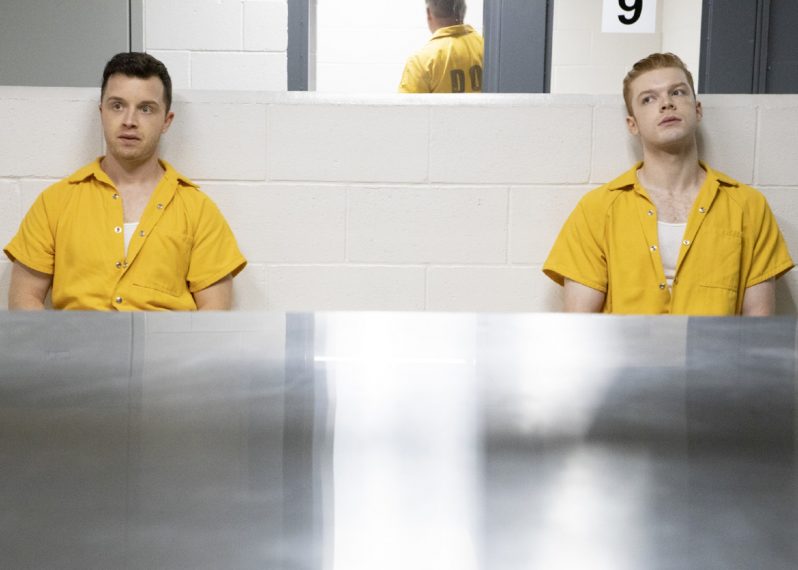 [Warning: The below contains MAJOR spoilers for Season 10, Episode 2 of Shameless, “Sleep Well My Prince for Tomorrow You Shall Be King”]

The Gallagher family shenanigans are at an all-time high as Shameless continues its landmark 10th season at Showtime. The series continues to carry us further into the future as Lip (Jeremy Allen White) deals with the difficulties of being a new parent sans Tami’s (Kate Miner) help and Ian (Cameron Monaghan) and Mickey (Noel Fisher) bicker as their reunion bliss deflates.

Below, we’re breaking down all of the key moments from the episode titled “Sleep Well My Prince for Tomorrow You Shall Be King,” but beware of major (and hilarious) spoilers.

The Boys are Back
Ian and Mickey returned to TV screens in this episode which saw their previous bliss absent within their confining prison cell. Viewers are immediately clued into their tension when Ian seeks some romantic time only to be shoved away when mayo is introduced into the mix — we’ll leave you to figure that out.

Immediately they begin bickering like an old married couple, and fellow inmates beg them to be quiet. When they’re finally free of their confines in other areas of the prison, we learn Ian’s putting his medical skills to good use in the infirmary. During treatments, Ian asks one of the patients named Chester for advice about repairing his and Mickey’s relationship.

The old man suggests a break or separation for a brief period, asking Ian to stab him so he can stay in prison and Ian can be sent to solitary for a little break from his boyfriend. Later on when Ian and Mickey are back together, Ian broaches the topic of some time apart and Mickey is instantly offended, accusing Ian of trying to break up with him.

After having revealed his plan for how he’d spend time apart from Mickey, Ian is told that he can pass on stabbing Chester and Mickey will do it instead. Mickey claims he wants to stab Chester because he wants to be the one who breaks up with Ian and not vice versa. As they search for a shiv they have hidden, they go to scramble out of the cell but are locked in. When the lock-in ends, they both stab Chester but Mickey gets a little carried away and continues to stab so as to cause further offense.

Unknown to these boys, Chester is a repeat offender of this tactic, using it as a means to stay in prison longer. So instead of getting in too much trouble, Mickey and Ian are dragged away to be reprimanded. Can they resolve their issues or will this fan-favorite duo not make it? 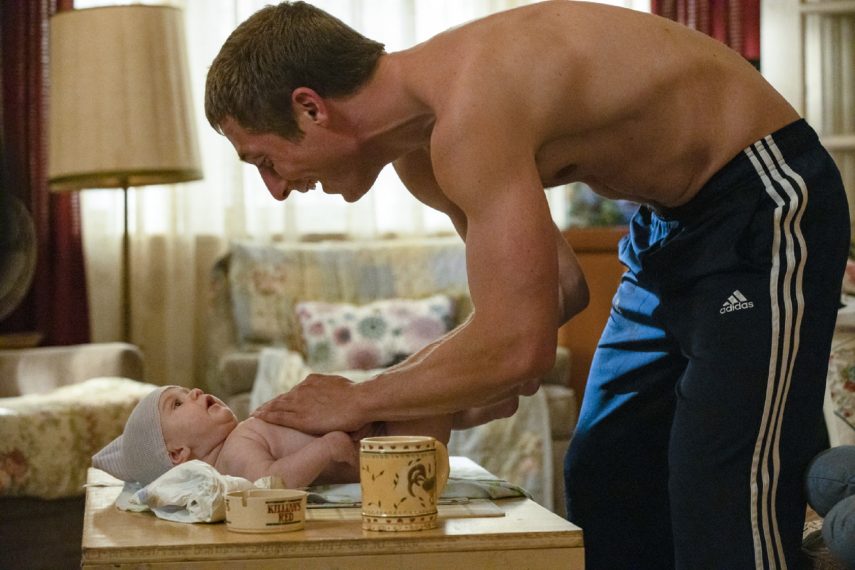 In this episode, Lip is on Dad duty as he transports his new bundle of joy home via public transit. Thankfully the show leaves nothing to the imagination as we witness him struggle as he carries a stroller over subway stairs and other obstacles. When he’s finally on solid ground, Lip pulls out his signature cigarette but sports a glove while doing so — an effort to keep the smoke off his son.

When he reaches the Gallagher house, Debbie (Emma Kenney) is exiting with Franny and greets them. She asks what his name is — “Freddy,” Lip says.

“Like Krueger?” Debbie asks in response. But it’s Lip’s answer that’s sure to stir some emotions in the show’s longtime fans. He tells her he chose it in honor of his former professor Clyde Fred Youens (Alan Rosenberg) who had passed away.

When he realizes Debbie’s not sticking around, he is left to deal with all of Freddy’s baby woes. Among those woes are feeding the boy with a fake boob, diaper leakage with no fresh replacements around and falling asleep on the toilet in his parental haze.

When V (Shanola Hampton) stops by, he asks if she can stay, but she tells him staying aware and taking care of the baby is his job now. She asks about Tami and we learn she’s still in the ICU. Later that night, it’s bath time and the dad joins Freddy in the tub, but when his diaperless state causes a mess, Lip nearly drops the baby.

Frozen, he worries aloud that he almost harmed his own baby by falling. Frank (William H. Macy) of all people offers some actual support. “He’ll be fine, you won’t hurt him,” Frank says earnestly, telling Lip to get some rest.

Con Gone Wrong
When Debbie informs Frank and Mikey (Luis Guzman) that they’ll have to pay if they want to stay in the house, they take to the streets in an effort to satisfy this bill as well as their drug habit. But you didn’t expect anything honorable, did you? The freeloaders try their hand at a very specific con — calling rideshare cars, with one of the duo as a passenger and the other jumping out and pretending to get hit by the car.

The first case doesn’t go as planned as the woman picking up Mikey offers to drive them to the hospital and calls their bluff when they ask for money instead. Meanwhile, they attempt the task again only to fail even worse as Frank plays passenger to a … priest. When he realizes who is behind the wheel, he tries telling Mikey to abort their mission but is too late. When Mikey turns to look up at the person who hit him, he immediately drops his act and tries to shake it off.

Of course, the priest feels for the men and offers them money, but $10 isn’t enough to solve Frank and Mikey’s problems. Mikey tells Frank he must reclaim his patriarchy and so he does, or at least attempts to, calling for a Debbie to relinquish her rules. It doesn’t entirely work, but Mikey manages to blackmail Debbie when he discovers her storage unit, making Frank think he has power over the family.

Her compromise? Debit cards for everyone with a weekly allowance. 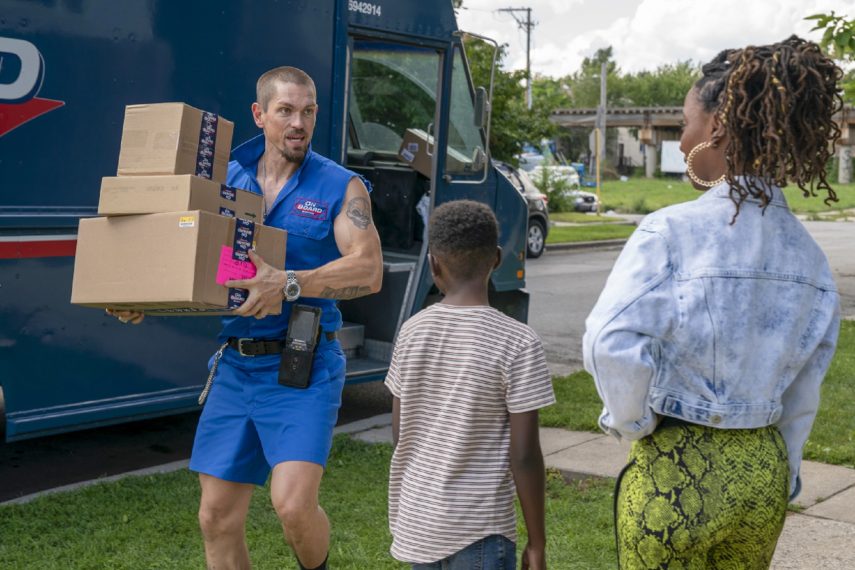 When a delivery man appears to have died due to some sort of auto-erotic asphyxiation, Kev (Steve Howey) and V make a decision to raid his truck with the help of their Alibi patrons. Needless to say, it feels like Christmas morning and when all the boxes are gone, Kevin takes the truck and attempts to pick up returns for further dealings.

Debbie’s Real Talk
During the episode, Debbie tries to return some shoes she had bought and planned to bring back, but when the cashier pulls out a black light, her gig is up. She begs him, saying she’s a single mother who doesn’t have the money for expensive shoes, but he’ll only agree to follow through with the return for sexual favors.

Offended, she asks why it’s always about sex. She talks it through aloud, wondering if it’s about power or something else. She meets the cashier to provide his request, but when she gets him talking, he begins to feel bad about himself and denies the favor he asked for.

Thinking she got off free and clear — the guy let her keep the shoes free — her perfect plans were squashed once Mikey caught onto her game.

Carl’s Return
Carl (Ethan Cutkosky) returned to work at the Shrimp Shack with his handsy boss Lori (Sarah Colonna) and meets the new manager, Anne Gonzalez (Chelsea Rendon). The sassy young woman is running a side hustle selling vape paraphernalia to kids with their orders and Carl takes note. He decides to offer a deal to go in with her on the business and split the funds between them.

Liam’s Family Revelation
Liam (Christian Isaiah) in the meantime looks for more answers about his heritage, considering he’s the only Gallagher who is black. Finally, he discovers some of his relatives that are black live down the block and confronts Frank. There’s a reason Frank never brought him there before though as they’re greeted with a shotgun and a threat to exit the property. Will Liam ever get any of the answers he’s looking for?