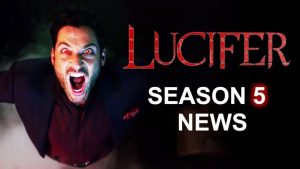 Lucifer’s writing team have just dropped the title for the fourth episode of season five – and we think it’s the most bonkers yet.

The writers have kept Lucifer fans waiting in suspense as they drop episode titles one-by-one, and they have definitely been getting harder for us to figure out.

And in true fashion, the Lucifans put their own detective skills to work and guessed the title right.

Taking to social media many Lucifer fans are trying to guess who it could be, and many of you have suggested that the chicken is an actual chicken.

Taking to Twitter lots of Lucifans think the chicken in question is, in fact, Ella’s bathtub chicken…Margaret.

Other’s have suggested it’s Lucifer, but surely it can’t be?

One fan tweeted: ‘I say this with the uttermost respect but don’t you dare hurt Margaret or you’ll be catching these hands.’

Another commented: ‘These comments… I’ve never seen such an outcry of defense for a fictional chicken named Margaret.’

One added: ‘If it’s not Margaret, then my brain jumps to Lucifer being the chicken because Chloe needs the eggs. Lucifer angst ahoy!’

Show bosses Joe Henderson and Ildy Modrovich previously said in a Q&A that a familiar face will be returning to the show now that Lucifer (Tom Ellis) is back on his throne in Hell.

The question would be who though?

Alternatively, we could be getting an answer/throwback to jokes from previous seasons involving the ultimate question in the universe… ‘why did the chicken cross the road?’

Chloe previously joked to Lucifer about chickens, and Ella Lopez (Aimee Garcia) also owned a chicken at one point. Throw in a chicken emoji and things are getting complicated.

In the meantime, we know the title of the first three episodes.

Episode one will be named Really Sad Devil Guy – which is appropriate seeing as he’s been forced back down to look over Hell despite just admitting his love for Decker.

In the second, Lucifer! Lucifer! Lucifer!, it seems that someone is, at the very least, going to call him out, but that means nothing really when he can conjure up pretty much anything he wants.

Tthe third, despite fans being convinced that it was going to be a reunion episode, centred on and titled Decker, it was actually Diablo…which is just another Devil reference.

Lucifer seasons 1 to 3 are on Amazon Prime Video and season 4 is available on Netflix.