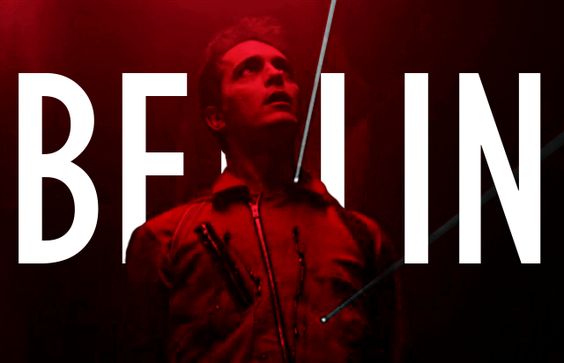 Most often than not, the death of a character in a story marks the end of their journey. But Money Heist’s (La Casa de Papel) Andrés de Fonollosa aka Berlin is not one of them.

In the upcoming spin-off series, Berlin, we’ll see the con-man’s journey before he became a part of The Professor’s gang. It is fair to say that when Netflix’s popular series ended last December after five nail-biting seasons of powerful characters and a gripping narrative (not to mention the mind-blowing cinematography) it left a huge hole for fans. We wanted more, especially of this one character, who seems to be hated and loved at the same time. And that’s why the franchise returns with a new series featuring Berlin as the protagonist, telling the story of who and what he was before we saw him in Money Heist. Titled after the popular character, the all-new series serves as a prequel to the events of Money Heist.

Berlin follows the cold, calculating, and sharp-as-a-whip conman and jewel thief, Andres de Fonollosa, and his gang, revealing how his character evolves into the enigmatic criminal we love to hate. The series comes from the same creator of the parent show Álex Pina, who is the showrunner, with Esther Martínez Lobato as a writer. Money Heist, during its run, became the most-watched series on Netflix and created a revolutionary fan following. So, it won’t be a surprise if Berlin also follows suit. For now, we can definitely say that the upcoming prequel is highly anticipated and we can’t wait for Pedro Alonso to star once again as the iconic character who made us laugh, cry, and cringe with his award-winning performance.

While you wait for the series to hit the streaming service, check out our detailed guide on the plot, cast, characters, filming details, and everything we know so far about Berlin.

Is There a Berlin Trailer?

It’s probably too early for the official trailer release of Berlin and unfortunately, there isn’t one at the moment. However, there is an exciting character introduction clip from the streaming network unveiling the brand-new cast of the spin-off series. The character trailer features new faces who were part of Berlin’s team before he was introduced in Money Heist. Playing against suspenseful background music, the one-minute clip introduces each new character, with Berlin helming the gang. The video should give you a fair idea of who’s who in the upcoming series, even if it doesn’t reveal much about the story. Check out this space for more clips and the official trailer of Berlin as and when they become available.

When Is Berlin Coming Out?
As of now, there’s no date set for the release of Berlin but it’s definitely landing on Netflix sometime in 2023, and speculations are that it could be sooner than later, most probably in the first quarter of the year. Watch this space for the latest updates on the release date of Berlin. And once it’s out, you’ll be able to watch the series with the following link:

In a press conference held in Madrid to announce the start of filming, Pina and Labato describe Berlin’s characterization in the new series as, “Berlin’s character has the most sparkling personality to place it in another universe. We loved the idea of introducing a new gang around Berlin in a completely different emotional state.”

Talking about the cast, fans have been wondering if any of the Money Heist characters could be returning for the prequel as well. Our theory is that they probably won’t, since most of them were discovered later by Sergio Marquina, aka The Professor, played by Alvaro Morte (The Wheel of Time). However, since Sergio and Andres are brothers, it’s possible that he might show up at some point in the prequel, though that is entirely speculation at the moment. However, we do know he was in Berlin’s life before they did the heist in the Royal Mint of Spain so it would be easy enough for him to have a cameo or guest appearance.

There’s also another similar theory about the return of Martin Berrote aka Palermo, played by Rodrigo de la Serna (Yucatán). We know from the previous series that Martin and Andres were best friends (though Martin wanted more) and the second heist was Martin’s way of honoring his dead friend. So it’s possible that there might be a story that tells us about their history and whether he was a part of Berlin’s earlier life.

Who Are the Creators of Berlin?
As mentioned above Berlin comes from the original creator of Money Heist, Alex Pina, with Esther Martínez Lobato writing. David Oliva and David Barrocal are also credited as writers. Pina also serves as a producer on the show. Barrocal, Albert Pintó, and Geoffrey Cowper are credited as directors for the series as well. Pina is a popular Spanish television producer, director, and writer, who is known for his previous projects like Los Serrano, Los hombres de Paco, Vis a vis, and El embarcadero, which he created and produced. He also wrote and produced the 2020 British-Spanish mystery thriller, White Lines, and the Spanish black comedy action series Sky Rojo for Netflix.

Labato is also a writer and producer and has previously worked with Pina on Money Heist, along with Barrocal, having produced some episodes. She has also been a writer and showrunner for Sky Rojo, Los hombres de Paco, El embarcadero, and White Lines, as is Barrocal. Oliva has previously written for a number of projects including Sky Rojo, Paraiso, and Stolen Away.

What’s the Latest Filming Update on Berlin?
In a recent Netflix event, the show’s creators revealed that the production for Berlin has already begun on October 3, 2022, with filming set to take place across various locations in Madrid and Paris and will continue for several weeks.

How Many Episodes Are There in Berlin?
Berlin is slated for eight episodes in its first season (with the possibility of more seasons to look forward to). Apart from that, there are no other details of episodes of their schedules but stay tuned for updates.

What Is the Background of Berlin?
As mentioned already, the series Berlin is a spin-off from the hit Spanish crime-thriller series Money Heist that took the world by storm during its five-part run. The original series follows a mysterious mastermind, known as “The Professor/El Professor”, who gathers a team of skilled thieves and plans a massive heist at the Royal Mint of Spain. Money Heist became immensely popular among fans, critics, and across different countries, leading to a franchise of shows, video games, art, and documentaries. The series ran from 2017 to 2021 sparking both conversations and controversies. In 2022, a Korean spin-off and remake titled Money Heist: Korea – Joint Economic Area was released.

Berlin is the second spin-off of the original series, this time focusing on one of the leading characters of the original story. Andres/Berlin is The Professor’s older brother, who is suffering from a terminal illness, which we learn about over the course of the parent show’s first season. In the second part of Money Heist, Berlin sacrifices himself to save his gang from getting caught after the heist. Despite his death, he returns in flashbacks in the following three parts of the series, where we learn about his earlier life before the heist at the Royal Mint and how he had planned the heist of the Bank of Spain, which is the second heist carried out by The Professor and his gang. Now, in the upcoming prequel series, we’ll see Berlin’s life before he met the rest of the gang of Money Heist.

So What Is the Plot of Berlin?
The story of Berlin is set before the events of Money Heist and is said to focus on his former exploits, his character evolution, and more. As revealed by the creators, he used to operate with a gang of his own and carried out major heists around Europe. In a conversation between Alex Pina and Pedro Alonso, at a Netflix global event, we learn that Berlin is about “…a trip through the golden age of the character when he robbed around Europe crazy in love. Essentially, it’s a series full of white-collar crimes, tension, travel, romance, and, most interestingly, a sense of humor.”

And that’s not all. We also have a very brief logline for the series revealed by Netflix that goes like this:

Only two things can brighten a dark day: The first is love. The second is stealing a fortune.

Simply put, Berlin is going to be a story of “love and heists” diving deep into the backstory of Andres before he became Berlin, and what made him so. So, if you thought Berlin’s death in Money Heist was the end of his journey, then you are in for a series full of surprise and excitement from this incorrigible thief.

My name is Damyan Ivanov and i was born in 1998 in Varna, Bulgaria. Graduated high school in 2016 and since then i'm working on wordpress news websites.
Berlin, Berlin 2023, La casa de papel, Money Heist, Pedro Alonso