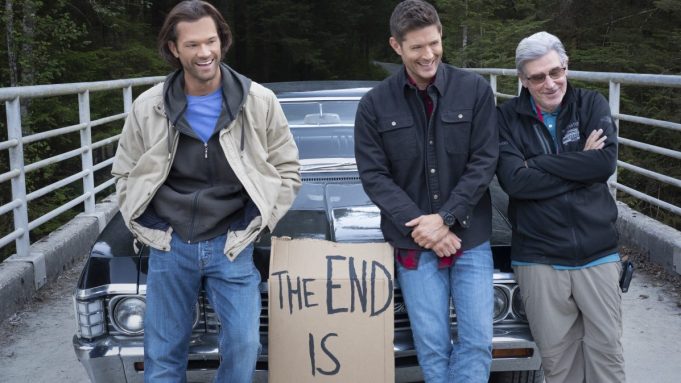 A day after airing the Supernatural series finale, The CW dropped a compilation video of stars from other network shows wishing the long-running show a fond farewell.

The 50-second clip featured cast members from series such as Legacies, Batwoman, Nancy Drew and Riverdale sharing sweet “goodbyes” to the cast and crew of Supernatural, as well as delivering some of their favorite lines from the series. Legacies star Aria Shahghasemi did his best impression of Misha Collins’ Castiel while reciting his infamous line, “I’ll interrogate the cat,” while Shahghasemi’s co-star Matthew Davis channeled Dean Winchester (Jensen Ackles) with the line, “I think you pissed off my sandwich.”

Cole Sprouse — who portrays Jughead Jones on Riverdale — also gave a shout-out to the boys of Supernatural, noting, “…You’ve really paved the way for the rest of us and we appreciate it so much.” And Nancy Drew actress Leah Lewis congratulated “the cast and crew of Supernatural on 15 great seasons.” Rachel Skarsten (Batwoman’s Beth Kane) also celebrated the show and praised the cast and “the impact you’ve made on so many peoples’ lives.”

The fates of demon-fighting brothers Dean and Sam Winchester were revealed on the Nov. 19 series finale, aptly titled “Carry On.” During the hour-long episode, Ackles’ Dean was killed by a pack of vampires during the brothers’ final mission together. Sam, portrayed by Jared Padalecki, was shown living out the rest of his life with his wife and son before passing peacefully years later. The last scene in the series showed the brothers reuniting in heaven.

Shortly after the series finale aired, Supernatural creator Eric Kripke revealed he originally planned a much darker end to the story of the Winchester brothers. “But I can assure the fans that my ending was so much darker than the ending they’re going with, so anyone who’s like, “Kripke should’ve ended it,’ I’m like, ‘You would’ve hated my ending!'” Kripke told Entertainment Weekly. “Because it was a horror movie and it was going to have a horror movie ending, so I can promise you the ending [they went with] you’ll love much more than if you had let me end the show.” Kripke stepped down as showrunner after Season 5.