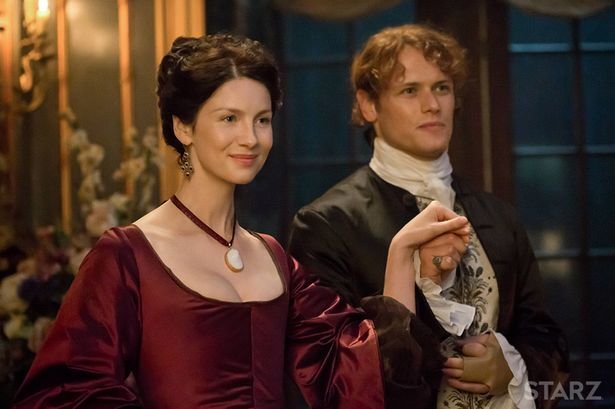 Whilst there aren’t a lot of Outlander episodes with a festive theme there are still a few which have been hailed by fans for getting in the Christmas spirit.

Most people who watch the Starz hit show will have noticed they don’t really do Christmas episodes which makes sense, as Christmas itself would have just been a religious celebration for leading man Jamie Fraser and the other people of his time.

While there aren’t many episodes with a Christmasy theme, there are still some great episodes to watch to get you in the festive spirit or even knock that inner grinch out of you!

Season 1, Episode 2: Castle Leoch
Episode two of the first season is sure to give fans that festive feeling of warmth and comfort. Particularly when Claire and Jamie are in front of the fire after they get back to Castle Leoch as she treats Jamie’s arm but we also see Jamie offer her comfort in her time of need.

Until now, Claire (played by Caitriona Balfe), has had to just accept what she’s not sure has happened and go into survival mode but she is able to release the tension held, just hoping that Jamie won’t hurt her or just leave her alone.

Season 2, Episode 1: Through a Glass, Darkly
According to fan Alexandria Ingham she “really enjoyed,” the Outlander season two premier and said “its certainly one to watch on Christmas”

Claire returns to her own time however it is clear she doesn’t want to be there so she is left to figure out how to accept her life for now, as she wonders whether Frank is even going to be there for her.

The second half of the episode is back in the 18th century. We see Claire and Jamie start their lives in Paris, and everyone knows there’s a holiday vibe at festive season.

Season 3, Episode 5: Freedom & Whisky
This is the only episode with Christmas in the episode. Claire, Brianna, and Roger are in Boston for the holiday season. After initially thinking she’d come to a dead-end in the search for Jamie, Roger finds something else and pieces it all together. He brings that news with the pretence of experiencing an American Christmas.

We see Christmas trees and gift-giving before Claire heads off to Scotland to go through the stones. This is certainly an episode to help you get in the mood for Christmas.

Season 4, Episode 12: Providence
This episode is described as having a lot of character development for Roger as he tries to be selfish but finds that it just isn’t in his nature to do that.

We also find Brianna figuring out the way to survive. She needs to choose a husband, but who will that be?

At the same time, we see Brianna figure out a way to survive. She needs to choose a husband, but who will that be?

Season 5, Episode 11: Journeycake
Finally, it’s the penultimate episode of the most recent season. Alexandria says that “a lot of book fans view this as a waste of time, but it’s a great episode for those who want to see the family together.”

We get a chance to see multiple members of the family connect as they get ready to say what they think is going to be a permanent goodbye to Bree, Roger, and Jemmy.

Christmas is a time to spend with family so it was only fitting to have this one on the list with the family focus. Which Outlander episodes are you watching this festive season? Let us know in the comments below.