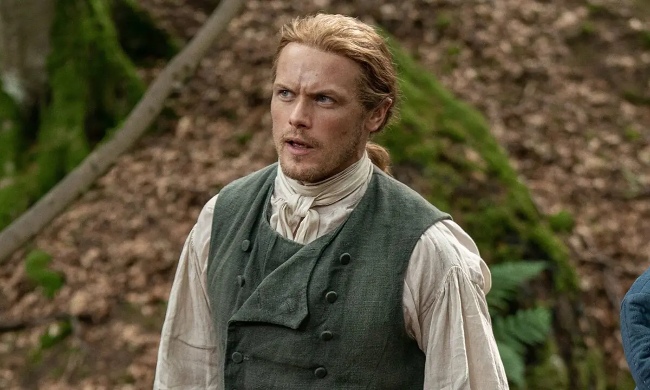 Sam Heughan has shared his reaction to the latest episode of Outlander in a candid post – and we can relate! Posting a snap of himself in character as Jamie looking highly concerned, he wrote: “Watching today episode like…” alongside the nervous, wide-eyed emoji.

His fans were quick to comment, with one writing: “The cliffhanger was a bit much!” Another worse: “Great episode!! Was up at 5:30 this morning to watch, this season is staying so close to the storyline of the books, bravo.” A third person added: “It’s just brilliant, and that’s why we are heading to Scotland again this year in June, second year in a row.”

So what happened in the episode? Warning, spoilers if you haven’t watched it yet! The episode saw Malva Christie accuse Jamie of fathering her unborn child, stating that he had turned to her for comfort after Claire nearly dies from contracting a mysterious illness, which she later deduces was different from the infection that had been affecting the townsfolk.

While Jamie adamantly denies the rumors, and Claire believes him, things go from bad to worse after Claire struggles with being an outcast at the townspeople believe Jamie has fathered Malva’s child, and takes ether, rendering herself unconscious. She dreams that Malva is at the house taunting her, and threatens to kill her, only to wake up and find Malva murdered in the garden.

Discussing her character, Jessica Reynolds told Entertainment Weekly: “When I was auditioning, I didn’t [know what was going to happen]. When I got the part, I found out from the book because I read my whole book. That’s how I found out. And I was like, ‘Oh, my good god!’ [author Diana Gabaldon] really found a way to put all the worst things that could happen to an 18-year-old girl into one plotline. It’s just pure tragedy, isn’t it?”

My name is Damyan Ivanov and i was born in 1998 in Varna, Bulgaria. Graduated high school in 2016 and since then i'm working on wordpress news websites.
News, outlander, Outlander 6, outlander season 6, Outlander Season 6 Episode 6, Sam Heughan, TV Series