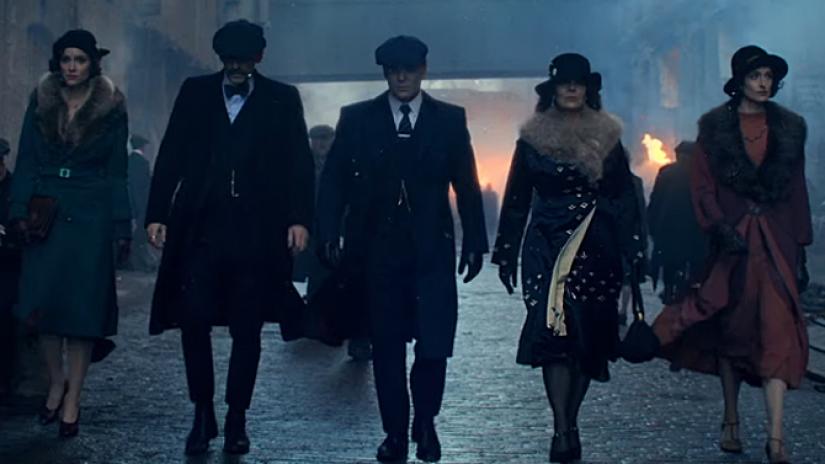 Is there anything more Peaky Blinders than a funeral procession set to the tune of Joy Division and Arthur (Paul Anderson) going all Tony Montana with a machine gun? I don’t think so. This episode was peak Peaky—blustering and bloody with a generous serving of scheming.

First things first—Linda (Kate Phillips) is still alive! Praise Jesus! Polly (Helen McCrory) only wounded her, though Arthur wishes she would have let Linda take the shot and put him out of his misery once and for all. When a distraught Arthur desperately begs his wife to sail away together, Linda realizes her botched assassination was a blessing. “I’m glad I didn’t shoot you,” she tells her husband, “it would have been a kindness.” Linda takes her ultimate revenge by leaving Arthur as a prisoner in his own mind.

The survival of one character, though, means the death of another. RIP Ben Younger (Kingsley Ben-Adir)—you were too sweet for this world. The military officer is blown to smithereens for helping Tommy (Cillian Murphy) in his undercover investigation into Oswald Mosley (Sam Claflin). A young child playing football in the street is also killed in the explosion. Tommy—shaken by the event—calls it “the consequence of good intentions,” which can be used to describe a lot of the actions in Peaky Blinders.

Everyone believes that their intentions are for the greater good. Pol shot Linda because she thought she was doing the right thing by saving Arthur. Mosley believes he’s representing the voices of the voiceless in his desire to “take back” the country and put Britain first—his rabble-rousing speech about English pride, invading foreigners, and Jewish conspiracies is both of its time and, unfortunately, timely, given the current political climate in the UK and the rest of the Western world.

Then there’s Tommy. I talked in the previous recap about his growing nihilism and suicidal thoughts, and if this episode is anything to go by, he obviously still has a death wish. Ghost Grace (Annabelle Wallis) continues to push him towards “the door,” and when he turns his car ignition you have to believe he thought (hoped?) it would explode. But there is also a suggestion that Tommy is starting to believe in something. Lizzie (Natasa O’Keeffe)—who has always had a good read on her husband—thinks this arrangement with Mosley is more than just a business deal. “You’re doing it because you think it’s the right thing to do,” she says. For as despicable as Tommy can be, he does abide by some sense of moral code. He does not share Mosley’s fascist ideologies, even if they do both enjoy political games and “strategies.” For most of this season, it’s seemed like Mosley has had Tommy on the back-foot. That continues to be the case this episode, as the sniveling MP makes him hand over a racecourse to the Billy Boys free of charge and orders him to fire his Jewish lawyer. Not to mention the heavy implication that Mosley was behind the murder of Officer Younger. He even tells Tommy to “drink less.”

But one should never underestimate Tommy Shelby. He always has a plan cooking. He might not have been able to bring down Mosley with information, but he can always turn back to his savage, street gang roots. Hiring his old cavalry comrade Barney (Cosmo Jarvis) to assassinate Mosley is certainly a violent course of action and an interesting one at that, but what is Tommy’s real end-goal here?

At first, Tommy offers the institutionalized Barney a cyanide capsule—a quick death to free him of both the literal and mental prison he’s trapped in. But Barney turns it down, much to Tommy’s surprise. Why wouldn’t he want to die and escape this hellhole? “Because one day things might change,” he says. So instead, Tommy busts Barney out of the asylum and gives him a job as a sniper man. But one has to think this is a death warrant for Barney either way? Shooting an MP at a heavily guarded rally? Making it out alive will be a tall task.

But is this even Tommy’s true intentions? I know that Peaky Blinders likes to play loose with the truth, but the real Oswald Mosley was never assassinated. He formed his British Union of Fascists party in 1932, but by the time of the Second World War, he was pretty much a political disgrace and eventually arrested in 1940. Could the show have Mosely killed? Sure. But I think it’s more likely that something will cause the plan to backfire—and maybe Tommy himself knows that? If it wasn’t already confirmed that we’re getting a sixth season, I might have believed that Tommy was setting himself up to take the fall. But we know that isn’t happening. Tommy always survives, even when he wants the opposite. Whatever happens next, I’m expecting more violence and scheming in the season finale.