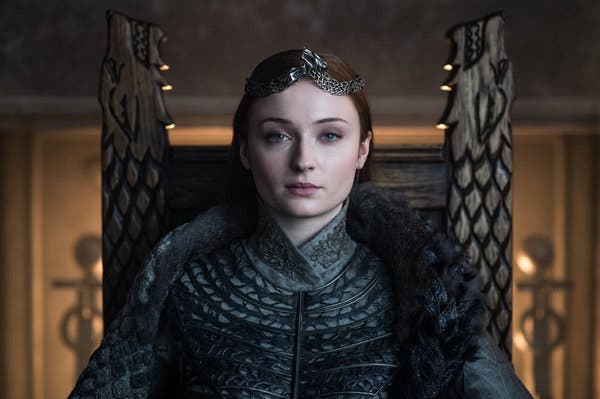 Sophie Turner is only 24 years old, and her career already involves a critically-acclaimed series that ran for eight years, a stint in the X-Men universe, and now a series on the newest streaming service to hit the market, Quibi, a mobile-only service where every episode of every show is no longer than 10 minutes.

Starring in the new series Survive alongside Straight Outta Compton’s Corey Hawkins, Turner plays a disturbed young woman named Jane whose story begins at a mental health facility. After that, she’s involved in a plane crash where she and Hawkins’ character, Paul, are the only survivors, and must make their way back to safety in harsh conditions.

Given the sensitive nature of the subject matter, a warning is displayed ahead of every episode, and helpline numbers provided at the end. The first four episodes are available now, with the rest being released weekly.

Talking to Refinery29 via email, Turner explored how filming Survive compared to something like Game of Thrones. Given how hairy that show could get, you’d figure Survive would be a piece of cake, but apparently not:

Physically I didn’t really prepare at all which was a big regret once we were up in those mountains! […] I know for a fact the Battle of Winterfell night shoot was far more brutal to film for the crew and cast. But considering I only had three night shoots for the Battle of Winterfell, I would say that on a personal level the mountain scenes in Survive were more brutal [for me].

I’ve watched all the available episodes of Survive, and I have to say that it’s some of Sophie Turner’s best work. If you thought she would never top her time as Sansa Stark, then you will have your mind blown after watching Survive.

As mentioned before, Jane is introduced as a patient at a mental health facility who has been diagnosed with PTSD and suicidal ideation. But when we meet Jane, she is showing signs of improvement, and is released. Unfortunately, Jane still plans to take her own life once out of the facility, and the show continues from there.

Turner her talked about her own struggles with depression and suicidal ideation, which is why this role was something she could connect with. “Mentally, I knew that headspace,” she said. “All I had to do was more specific research to hone in on the specificities of Jane’s mental illness.”

I hope people take away from Survive that those figurative mountains that you feel you have to climb when it comes to mental illness, are manageable. You just have to actually begin that climb and get the help that you need.

Given how difficult things have been for a lot of people lately, you may not immediately want to watch something like Survive while stuck at home. But as Sophie Turner explains, there’s another side to it. “People need this show right now specifically because not only does it provide an escapism for people, but also it feels incredibly relevant to their situation right now. That isolation — the fight against an invisible monster.”