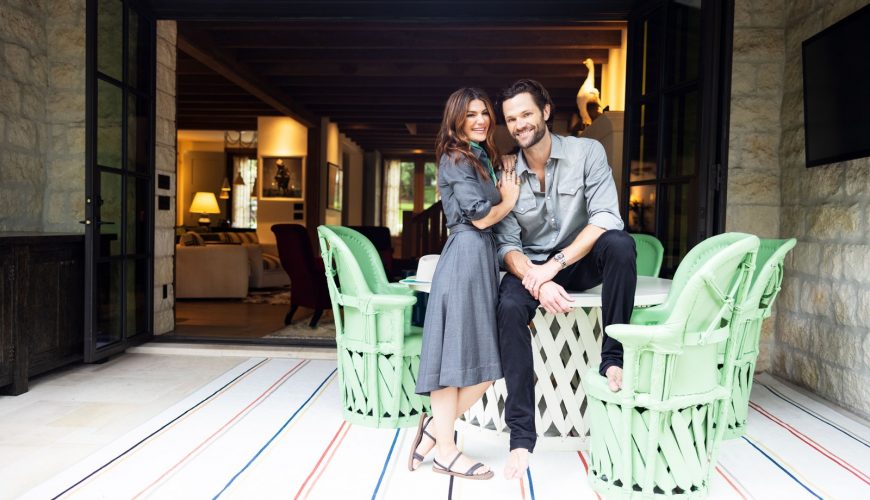 In 2010, when Jared and Genevieve Padalecki first bought a place in Austin, it seemed like they were the only actors in town—“other than McConaughey and Dennis Quaid,” as the former Gilmore Girls heartthrob puts it.

The couple, who met on the set of the cult-favorite CW show Supernatural, and who now star on the network’s reboot of Walker, Texas Ranger, gravitated toward Texas because of its “slower pace.” Soon, they decided to give up their Los Angeles residence altogether and live full time in the state where their current show shoots.

The Padaleckis purchased their current Austin home in 2012, and have spent the years since slowly creating their ideal modern farmhouse. That’s where their three children (Thomas, 9, Shepherd, 7, and Odette, 4), as well as numerous dogs, chickens, mini horses, and even bees, live together in harmony. The house—which began as a model “Texas Tuscan,” according to their designer, Virginia Davidson—underwent a full gut renovation in order to become a compound inspired by the historic German homesteads of nearby Fredericksburg. “For the walls and woodwork, we pulled from these traditional German milk paints,” says Davidson.

“They are in these very sort of neutral but tonal palettes: Wonderful chalky whites, beautiful grays and blues, and browns.” Those hues provide an excellent foundation for layering the textures required to create an intimate yet cozy home. The result is a bit masculine, a bit rustic, and refreshingly unlike what you usually see on Instagram.

Davidson commissioned numerous custom pieces for the couple, including rugs, runners, and pillows. “She just has a great way of making it feel very lived-in and comfortable,” says Genevieve, who first contacted the designer 12 years ago to work on their place in Los Angeles. The two women have become very close friends, which allowed the project to stretch on for years. (“A normal client wouldn’t have tolerated it,” jokes Davidson.)

Although everything may be bigger in Texas, Jared (a San Antonio native) loves the “little nooks and crannies” that are present throughout the abode. “We didn’t want it to feel cavernous. A lot of homes in Texas focus on making it as big as possible, with two-and-a-half-story grand entrances. That’s fine if that’s your thing, but it is not our[s]. We would rather it feel like a little crab shell.” (Fittingly, Jared’s astrological sign is Cancer.)