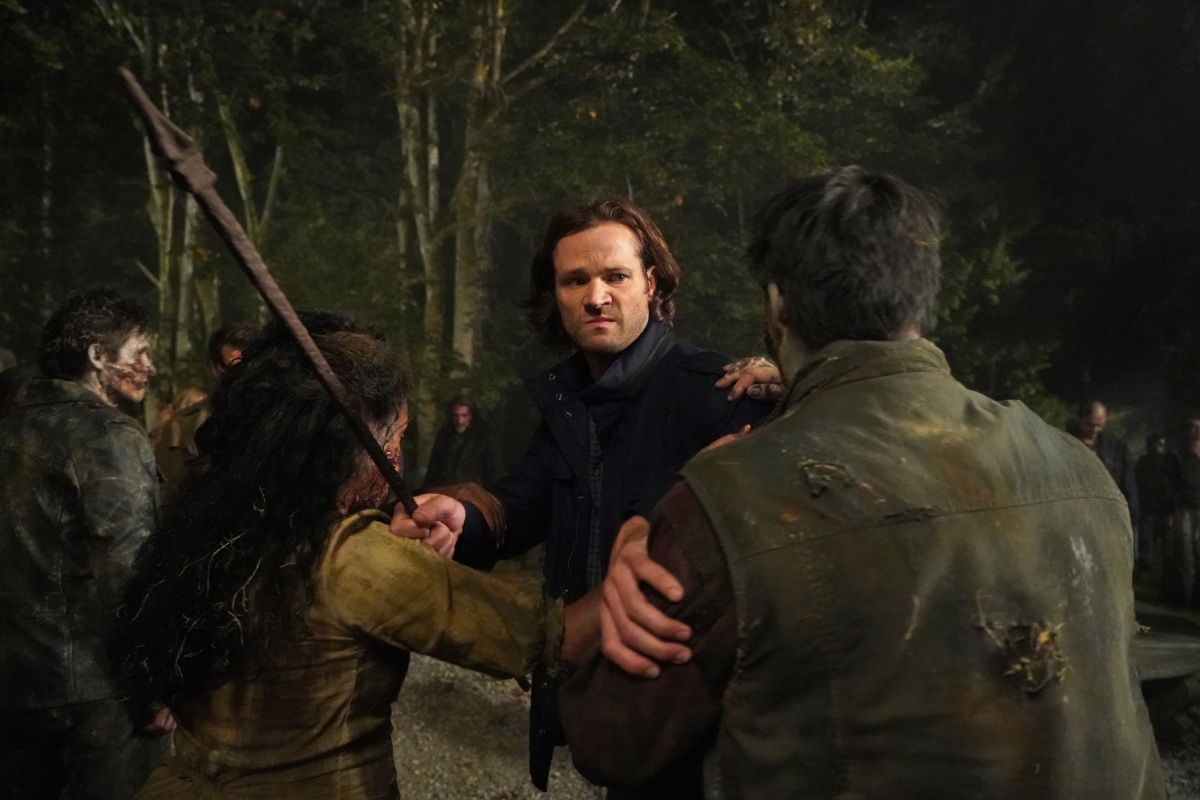 Supernatural kicked off its fifteenth and final season on Thursday with a Game of Thrones-esque herd of zombie ghosts — ghost zombies? — trying to claw their way through a door, on the other side of which are Dean, Sam, Castiel and Jack’s body. (All that was missing was someone yelling, “Hold the door!”)

Even though he killed Mary, Dean notes that Jack didn’t deserve this. And while it appears that Jack is truly dead, his body is another story. Out of nowhere, he stands up and says, “Hello.” Surprise! Jack is now the vessel for a smart-alecky demon named Belphagor, who just wants things to go back to the way they were before God unleashed Hell on Earth. He wants what the Winchesters want, playfully insisting, “We’re twinsies, guys.”

Belphagor offers to help out the trio, and seeing as how they’re trapped in an abandoned building, they go along with his plan to blast the spirits out of those dead bodies via a spell. But the ghosts, including the pilot episode’s Woman in White, are still out there, so Belphagor suggests a magical circle that will trap the spirits within a one-mile radius. There’s just one problem: A small town resides within that radius. Dean and Sam pretend to be FBI agents who have come to evacuate the town because of a nearby gas leak.

Dean asks Cas to stay with Not!Jack, but the distraught angel replies, “I can’t even look at him.” Left alone in the car with Dean, Belphagor expresses his amazement at how good-looking humans are these days, especially one Dean Winchester. “You’re gorgeous,” he remarks, before asking who Jack was. “He was our kid. Kind of,” Dean replies solemnly. Belphagor then reveals that he was a fan of — deep callback alert! — what Dean did during his time in Hell. “It wasn’t torture, it was art,” Belphagor says. He also tells Dean that when God snapped his fingers, every door in Hell opened — including the cage holding Michael.

Dean, Sam and Castiel are able to cast a barrier around the town with the help of Belphagor’s spell. “You OK?” Dean asks Cas when they reconvene. “Yes, but…” Cas starts to reply, before Dean curtly says, “Good,” and walks away.

In the midst of the mission, there’s also a troubling development: Cas is unable to heal Sam’s bullet wound from when he shot God. When he tries, Cas finds that the wound has an energy he’s never felt before, and there are mysterious flashes of a Lucifer smirk-esque Sam while Dean’s voice pleads with Sammy.

As Dean later cleans the wound, he expresses his frustration at just being a rat in God’s maze this whole time. Sam notes that they still saved people, and if God has bailed now, then that’s good, because it means it’s just them. When he and Dean win, they’ll be free. The Winchesters against every soul in Hell? Dean likes those odds, and that means… “We’ve got work to do,” Sam announces, slamming the Impala’s trunk closed as the episode flashes back to the same shot from the pilot.

Supernatural fans, what did you think of the show’s final season opener?