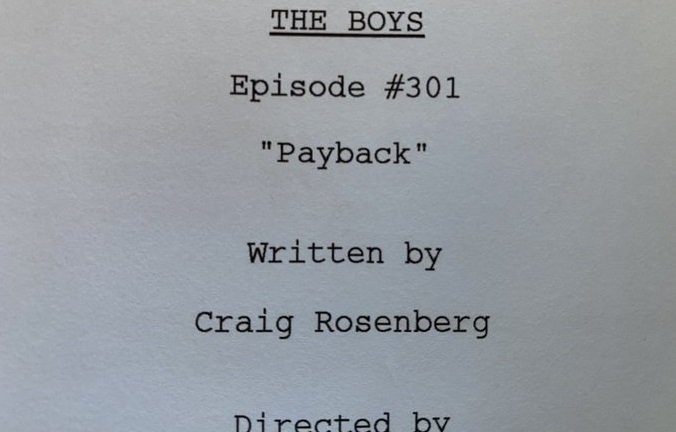 The Boys are getting ready for another round with the supes.

While coronavirus has delayed many production schedules, including Amazon’s satirical superhero series, showrunner Eric Kripke has announced The Boys season 3 will start filming in “early 2021.

Season 3 will formally introduce Supernatural star Jensen Ackles as Soldier Boy, the original superhero, and Kripke has a slight tease for that in the form of a photo of the first episode’s script.

The first hour of season 3 is titled “Payback” and it’s written by Craig Rosenberg, who wrote season 2’s big whale episode and is showrunning the upcoming college-themed spin-off of The Boys.

Payback is the name of Soldier Boy’s superhero team.”Payback, in the world of our show, was the Seven before the Seven,” Kripke told EW. “We will be exploring the history of that team and all the members in it.”

As we learned in season 2, Soldier Boy was one of the first people injected by Vought founder Frederick Vought with Compound V, the company’s serum that gives superpowers to humans. Soldier Boy was active fighting Nazis in World War II. In the comics, other members of Payback included Stormfront (who was gender-swapped with Aya Cash in the role for season 2), Eagle the Archer (who appeared in season 2 by way of Langston Kerman), Tek Knight (referenced by Colby Minifie’s Ashley), and Crimson Countess.

“One of the reasons that we’re getting into Soldier Boy [in season 3] and that team, Payback, is we’re interested in exploring a little bit of how we got here,” Kripke said. “Through the history of the supes, we can tell a little bit about the history of America and how we ended up in the current fraught position that we’re in. Soldier Boy gives us an opportunity to do that.”

By “fraught position,” he means our current climate in which people are fighting against white supremacy and systemic racism. “Certain politicians like to pitch this somehow idyllic ‘good old days’ where everything was perfect and calm. That is complete and utter bulls—,” Kripke added. “It was never that way. So, by exploring the history of Vought in the history of America, we get to make some of those points. There was never an America when they say ‘Make America Great Again.’ It was always a struggle. That’s the point. It’s a struggle to make things better.”

Season 2 of The Boys delivered the most-watched launch of any Amazon Prime original series, according to the studio. The finale debuted on Friday, Oct. 9.