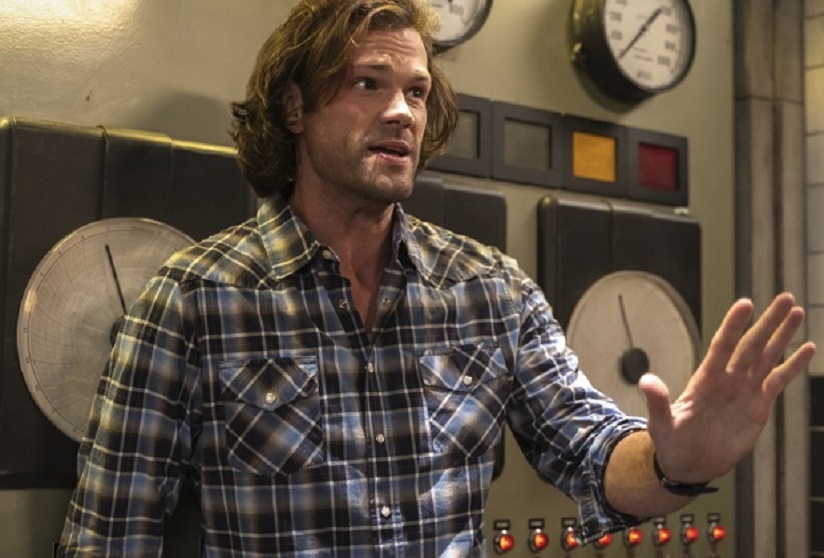 In some ways, this week’s episode of Supernatural feels like the start of the final season for Sam and Dean. As viewers, we’ve watched as Chuck has started making plans for how he wants to end the story, but up until this episode, Sam and Dean thought they were done with Chuck. They spent the first three episodes trying to undo what Chuck did in the season 14 finale, and then in episode 4, they worked a case. It wasn’t until Lilith(!!!) showed up and told them Chuck is still around that they understood what they’re facing: the end. And that’s why I really liked this episode. (Well that, and all the callbacks!)

We start in Black Forest, Colorado, where three friends (and recent college graduates) are on a camping trip. And as far as Supernatural is concerned, camping is a surefire way to get yourself killed. So when something kills two of the three campers, it’s less than surprising. As for what happens to the third, we’ll get to that.

First we head to the bunker, where we see Sam’s sent about a million unanswered texts to Castiel. (Don’t you love an angel who texts?) When Dean returns from a supply run — and makes the stupid decision to eat ghost pepper jerky — he asks Sam about the situation in Colorado. It seems the body count is up to five, and the theory is that it’s a mountain lion. Naturally, the boys hit the road to check it out. (After Dean dumps water all over his face.)

In the car, Sam falls asleep and we’re treated to another one of his dreams. In this one, Samifer is sitting in the bunker, white suit and all. Dean walks up behind him, with the Colt in hand, and says, “Please forgive me,” before he shoots his brother in the head. But the Colt doesn’t work. Not only does Samifer heal himself, but he burns Dean alive. Sam then wakes up in the car and promptly does NOT tell Dean about his dream.

Once they arrive in Colorado, Dean informs Sam that they’re throwing things back to season 1: They’re pulling out the Fish and Wildlife badges they used in episode 3 of the series and going as Agents Ford and Hamill. And no, they haven’t updated the photos on the badges, which leads to multiple people asking Dean if that’s actually his badge. (For what it’s worth, this is a very fun way to comment on how long the show’s been on and is a super-enjoyable bit for fans who’ve watched since season 1.)

At the hospital, Dean talks to Ashley, the survivor from the camping trip. Once he assures her that “whatever you’re about to say, we’ve heard worse… we’ve heard weirder,” she tells him that a man with claws and fangs killed her friends and threatened to kill her if she told anyone. Dean quickly decides it’s a werewolf, and once he informs her that monsters are real — remember when they tried to not tell people this? — he promises that he and Sam will protect her. With that promise, she tells him the name of the werewolf: Andy.

Sam and Dean head out to meet Andy, who lives with his brother, Josh. And when the two of them refuse to touch a silver pen, Dean considers the case closed (and too easy?). Meanwhile, inside the house, we find out that Josh killed Ashley’s friends. Andy, however, let Ashley go. “I didn’t want to hurt people in the first place,” Andy says, so Josh promises his brother that they can stop… once they take care of Ashley.

As soon as she’s out of the hospital, Ashley calls Dean, and he and Sam give her their room at the Sleepy Bear Inn. She asks if Dean will stay with her until she falls asleep, and he agrees, which gives them a little time to chat before the pills knock her out. She asks if Dean likes his job, which, despite all the bad stuff, he says it still feels good to help people. “I’m where I’m supposed to be,” he tells her. As for Ashley, she just graduated college and has no idea what to do with her life. “Wouldn’t it be great if everything was just planned out for you,” she says. “If it was all just already decided?” Dean’s response, as someone who recently discovered his life was scripted? “No, not really.”

Ashley then falls asleep… but so does Dean. By the time Sam returns from a food run, Dean is out and Ashley’s gone. They quickly make their way out to Josh and Andy’s place, where Ashley is tied up. It’s there we get a good brothers-vs.-brothers showdown as Sam and Dean fight Josh and Andy, but ultimately, it’s Andy who kills Josh. “He was never gonna stop,” Andy says. “He turned into a monster. And I’m a monster too.” Andy then turns the gun on himself. And here’s where things get even more interesting: When Ashley tries to push Dean’s hand away, she trips and falls onto some deer antlers, and for a second, you think she’s dead. Until she says, “Well this is a bitch,” and gets up. Because she’s not Ashley. She’s LILITH!!!

According to Lilith, she was dead and sleeping away in the Empty until God brought her back. He wanted her to play the damsel and seduce Dean and then ultimately, get the Equalizer from the brothers. Of course, the boys refuse to give it to her, and when she blasts them backward, Sam hits his head and is knocked unconscious, leaving Dean to protect his brother: He vows to show her where the gun is and she vows to torture him endlessly if he doesn’t.

While they hit the road, Sam has another dream/vision: He sees Demon Dean — complete with the Mark of Cain on his arm — fighting Sam in the bunker. Once Dean flashes his black eyes, he uses the First Blade to stab and kill Sam. Sam then wakes up.

On the way back to the motel, Lilith tells Dean that God — whom she calls a “low-rent Dean Koontz” based on the line he gave her about life being scripted — always ends their story the same way: with one brother killing the other. It’s why God wanted them to meet the werewolf brothers, because it’s foreshadowing.

But once they get to the motel, Lilith realizes Dean doesn’t have the gun there. Thankfully, Sam shows up in time to put a Devil’s Trap bullet in Lilith’s head, but it doesn’t hold her for long. She heals before they can get away, and furthermore, she deduces that the gun must be in the car. Once she locates it in the glovebox, she melts it. Then, with a “See you soon,” she’s gone, along with the boys’ hopes of ever defeating God.

Back at the bunker Sam tries to call Castiel, but he doesn’t answer. The brothers then figure out what to do now that Chuck’s not gone. Dean tells Sam about Chuck’s endings, and Sam finally tells Dean about his dreams. Sam thinks he must be seeing Chuck’s endings, that the wound they share has linked them. “What if somehow I’m in his head?” Sam wonders. But it doesn’t give Dean much hope.

It’s the question of the season, and the fact that the brothers are finally asking it is what makes me feel like this is really the start of it all for Sam and Dean. Let’s just hope they find a way to change their ending before we have to watch one Winchester kill the other for real.