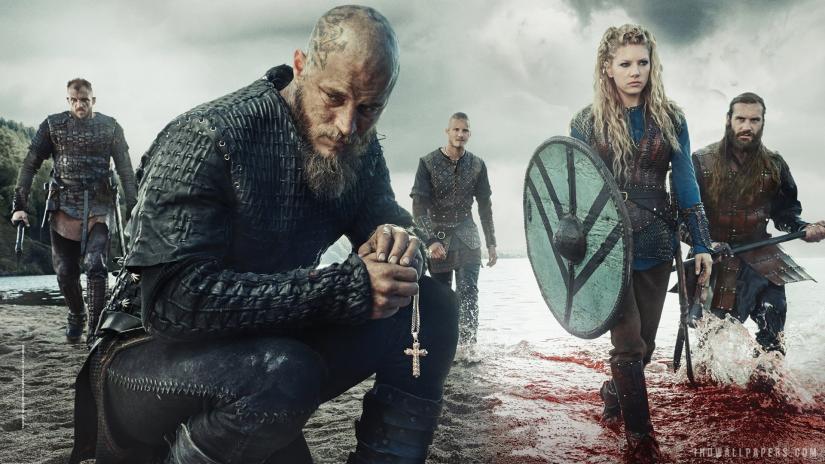 There are quite a few different narrative threads going on all at once in Vikings at the moment. I’ll go through each briefly. There’s almost too many things happening to properly recap events in detail. We’ll start where it all began.

In Kattegat, Bjorn takes Ingrid as his second wife. Last week Gunnhild solved the problem of Bjorn’s faithlessness by suggesting he take a second wife, and Bjorn appears to have gone along with it. It’s a novel solution to a problem Bjorn has always had with his women. Once he’s made his conquest he tires quickly and moves on to plow new fields.

She puts on a brave face, telling Bjorn to go to Ingrid on their wedding night. He lingers, obviously guilty over the pain he’s caused her. But she insists. He made a decision and now he needs to follow through with it. Gunnhild acts tough, but when Bjorn leaves we see a tear slide down her cheek. In another scene she taunts Ingrid, clearly not nearly as comfortable with this new arrangement as she pretends.

The wedding itself is lovely but awkward.
Bjorn, concerned about Harald, sends Erik and a group of warriors out to patrol their borders. They come across a scouting party of Oleg’s Rus warriors and a battle ensues. Oddly enough, it appears the Rus were waiting for them, as they had bowmen hidden in the ships and other warriors ready to encircle Erik’s men and shield maidens.

Neither side emerges victorious and both fall back. Erik brings back one of the Rus banners to Bjorn. We also discover that Ivar was leading this particular scouting excursion into Norway. In a merry coincidence, he’s come across poor lost Hvitserk, and takes him back to Kiev with him. Laying in the boat, Hvitserk asleep on Ivar’s shoulder, Ivar asks his brother why he always haunts him, always follows him around. “But I am happy to see you,” he says. Truly, this version of Ivar is so much better than the last. Thoughtful, even a little sweet, but still ruthless. I’m a fan.

In Kiev, Hvitserk brags to Ivar about killing Lagertha. “The bitch,” he calls her, though he didn’t kill her out of spite or revenge, but out of his own madness and sickness and confusion. (As a side-note, I do think Lagertha was wrong to kill Auslag the way she did, and I can’t really blame Auslag’s children for being angry at Lagertha). Ivar doesn’t react at the news, though he seems startled by it.

He takes Hvitserk to meet with Prince Oleg and Princess Katya. Hvitserk doesn’t react to Katya at all, and when Ivar asks him about it later he doesn’t even see the resemblance. “You really are crazy,” he tells his crippled brother.

Later they watch as Oleg parades his vast army about the streets and then lines them all up in perfect rectangles outside the city walls. And at this point I will pause briefly to comment on the bad history at play here on this History Channel show.

There is no evidence whatsoever of the Rus ever invading Scandinavia, and certainly never in great numbers. Perhaps a little raiding did occur, but the historical Oleg never sent an army to conquer Norway, and both the Rus people and the Vikings (all of whom were related) tended to raid other peoples and civilizations. The Rus would raid south of their borders, in richer and warmer climes. Sometimes, Viking kings would find safe haven in Rus lands. The historical Oleg raided Constantinople, in fact.

I fail to see why we need to twist the history so brazenly here just so we can have Ivar and Hvitserk once again face off against Bjorn. I realize we’re long past anything resembling actual history, but whenever there’s a choice between hewing close to the real thing and going wildly off the mark, I’d prefer some semblance of accuracy. Why not have Oleg and Ivar march on Constantinople? Oleg has no reason to invade Scandinavia. He would be fighting his own heavily armed, decidedly deadly kinsman for little plunder compared to what he could find elsewhere. It makes no sense.

Beyond all that, didn’t we get enough brother vs brother last season? That’s all it was. The entire story was one dragged out, ridiculous war between Ivar and his brothers. I’m still a little confused why we didn’t spend more time with the sons of Ragnar invading England and carving up that country, settling the north and driving back Alfred the Great. That’s a huge part of this history and it was abandoned almost entirely for no good reason. While I enjoy the Rus storyline, I just don’t understand the direction Hirst is taking it.

Bjorn sends Erik to plead with King Harald for an alliance against the mighty Rus, who apparently are such a fearsome foe that all of Scandinavia and its famed warriors and raiders should quake in their collective boots at the mere sight of a raiding party or two.

But Harald has become irritatingly full of himself at this point—a real annoying bastard if ever there was one, now that power has swelled his head several sizes too big. He knows that Erik is an outlaw and decides that he’ll have him executed in the morning. And piss on Bjorn’s offer of alliance.

It’s King Olaf who convinces Finehair otherwise. Grudgingly, he decides to spare Erik and send him back to tell Bjorn he accepts, but only if Bjorn abandons the defenses of Kattegat to come to Harald. It sounds like a bad deal for Bjorn and I wonder if he’ll accept. I suppose he will because Bjorn is all bluster and brawn and very, very little brains.

In Iceland, Torvi very nearly dies while giving birth to her and Ubbe’s first child together. It’s breach, but thanks to the hard work of one of the viking women and the prayers of one wanderer, the baby is born without having to cut it out and Torvi survives. She must be very old at this point considering she was a grown woman when Ubbe was a child, and it was very rare for older women to survive childbirth. But this show has played so fast and loose with age (especially of its women) that we can’t really tell how old she’s supposed to be.

It turns out that the wanderer (whose name I can’t quite catch) is actually a Christian monk pretending to be Norse. His real name is Athelstan, something Ubbe gets quite a laugh about, and he says he took the wanderer’s name and identity when the other man grew sick and died. We see a flashback of Athelstan killing the man, however, so we know he’s a liar through and through.

He also tells a tale of a “golden land” he came across far to the west. America, no doubt, unless this, too, is a lie (or perhaps a story told to him by the dead viking). Ubbe wants him killed because he’s a Christian, but Torvi reminds him that Ubbe himself was once baptized into Christianity, long ago before this show gave up entirely on its England plot and shoved all of that under the rug.

Ubbe wants to go west. He is the only of Ragnar’s son with any of the adventurer and discoverer in him. I hope we see him set sail and find the New World before this show is over. I really do like Ubbe.

I’m still confused a bit by the whole Floki storyline, however. Flatnose and all the rest continue to hide some dark secret from Ubbe, but I’m still not sure what it is. Athelstan tells him that Floki gave him his wedding ring when he left, and that Floki left the settlement naked. But I remember Floki in the cave at the end of last season and he was certainly not naked. I’m just not at all clear on what’s going on with this sub-plot. And it’s a little odd that the settlement is now so much larger and more flourishing than before. It almost defeats the point of Floki leaving. But also . . . are we supposed to think that all these people were there before, and not just the rag-tag group from last season? It’s hard to follow.

This episode had its moments, but I feel like there’s both too much and too little happening in Vikings as we reach the mid-season finale next week. So many different plot-lines going on at once, but very little forward momentum. And what forward momentum we do have seems to be encroaching all-out war once again, this time between the powerful Rus armies and the viking horde.

Always, the vikings seem outnumbered and out-matched by these foreign powers. Recall when Hvitserk brought Rollo back to help in the battle between Ivar and Bjorn, and inexplicably Rollo helped Ivar. His Norman troops were so much more disciplined and plentiful than Bjron’s men. The Rus look to be a similarly well-organized and heavily armored threat.

This makes little sense. The vikings were the terrifying foe of the time. They were the ones with the most powerful raiding forces. They were the ones that struck fear into the hearts of their enemies far and wide. This show sometimes seems to paint them as the scrappy underdog, but at the height of the vikings’ power, that was most certainly not the case.

I’m still enjoying Season 6 a great deal more than Season 5, but some of the irritating writing choices have begun cropping back up, and these begin to remind me of the many ways this show has simply given up on many of its best stories. Can someone help remind me why exactly we have left Britain behind? Why the story of Alfred is no longer part of this show? It sometimes feels like it wants to be everything, touch on every aspect of viking history, and in so doing loses the kind of focus needed to tell one really good story instead. The Last Kingdom does this much better, focusing only on one specific conflict between the Saxons and the Danes. No need for Iceland and Kiev and Paris and everywhere else.