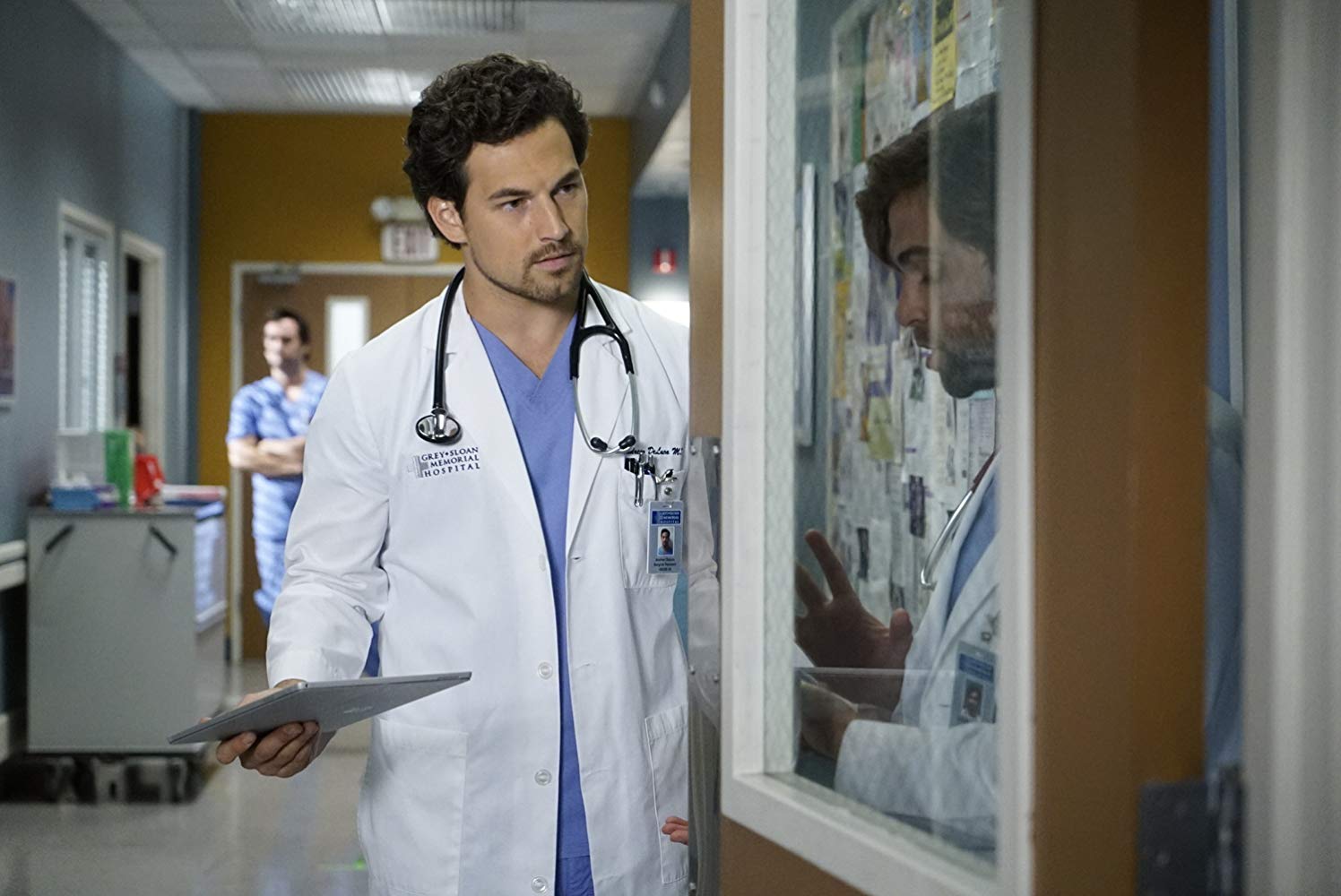 I like to think that this season’s Grey Sloan Memorial is just Willy Wonka’s chocolate factory. Each week we’re going to lose another doctor to Pac North. Karev is going to pick them off one-by-one until all our favorite people are forced to wear those horrific green scrubs.

This fictitious scenario does not include Meredith Grey. I’m not really sure what’s going to happen to the feisty doctor. Remember the article she was going to write that detailed all the ways hospitals are taking advantage of patients and doctors? The very long list of story ideas she sent to the editor resulted in one big exposé boasting the headline: “Hospital Hell at Grey Sloan Memorial.”

They used every idea Meredith gave them without context or explanation. And now her name is attached to the scathing article. Some people are angry. Some call her a hero. Bailey is oblivious until the back door of an ambulance opens and the patient discovers that he’s been taken to “that article place.”

He refuses to leave the rig, unwilling to be treated at Grey Sloan. So Owen, who was hanging out in the ER on paternity leave, hops in the ambulance with him, instructing the driver to take them to Pac North. Although Weber and Karev consider Owen an oscillating fan in hell, they can’t help but be embarrassed by their disheveled hospital.

Karev gives Owen a tour and asks him to use his imagination picturing new paint and better lights. They hear a scream and take off running down the hall. Karev and Owen stabilize a patient and over the poor man’s open guts, Karev offers Owen the entire trauma department at Pac North.

The offer is laughable. Who would choose to work at Pac North? Owen scoffs at the offer with Teddy but stops short when they run into Korasick. Refusing to obey the restraining order, Korasick gives Owen permission to stay in his glorious presence before offering Owen his job back. Grey Sloan needs good doctors.

Funny. Owen wasn’t fired. He quit. Korasick’s haughty behavior causes Owen to boldly proclaim that he will not be returning to Grey Sloan. He’s been recruited to another stellar organization. (Psst: Pac North is the opposite of stellar.)

Meanwhile, Bailey is on a warpath. She’s mad at Meredith. She’s mad at DeLuca for not warning them about the article (which he didn’t know about) and for not pledging loyalty to the hospital that raised him. Bailey becomes literally hot and bothered and it’s Jo who asks Bailey if her heart condition is acting up?

Maggie checks Bailey out, confirming that her heart is perfectly fine. But the problem might be hormonal. Cue Bailey crying in her office, stripping off her white doctor coat, and complaining to Ben that she’s going through menopause.

DeLuca texts warnings to Meredith while she’s picking up trash along the highway. Cristina (yay!) messages Meredith that she should move to Switzerland before Bailey kills her in her sleep. Meredith has no choice but to leave her community service to sneak into Grey Sloan to explain things to Bailey.

Bailey couldn’t care less. She lectures Meredith on how she betrayed her mentor, her hospital, and their friendship. She hormonally asks Meredith to leave her office just in time for Maggie to enter and confirm Bailey’s suspicions. Yes, she is pre-menopausal. She’s also pregnant.

There’s something in that Grey Sloan Memorial water, people.

Meredith runs into DeLuca as she’s leaving the hospital. She bemoans the fact that her friendship with Bailey didn’t pull any weight in this situation. And, she’s been called in to the judge again for leaving her community service. DeLuca freaks out, begging Meredith to keep her head down and get back to work. Don’t flip out and take the entire organization down with her. Self-preservation! Don’t make any more enemies!

Meredith turns cold. She reminds him that there wasn’t anything she said that wasn’t true. And if DeLuca thinks she’s is going to sit back while something is broken and hurting people, he doesn’t know her at all.

Is this the end of MerLuca? I can’t decide how I feel about this.

I do, however, know how I feel about the storyline where a stowaway on an airplane falls out of the sky and explodes like a water balloon on top of a couple of college kids. What. In. The. World. Alicia is in bad shape. Josh is walking but covered in blood. And his hoodie has a toe inside of it. Excuse me while Josh and I dry heave over here.

Unfortunately, Alicia passes away and Link has to tell Josh the sad news. Josh only dated his girlfriend for a short time, but he knew that he didn’t want to spend a moment without her. Josh and Alicia used to talk about “that book where the kids have cancer” and liken themselves to the characters. Minus the cancer. And now a body falls out of the sky and she’s gone. He slumps into a heap in Link’s arms and cries.

This emotional display gives Link the courage to tell Amelia that he is in love with her. He’s scared. He’s skeptical. But he likes the feeling. Amelia responds with a heartfelt “thank you” and Link doesn’t seem to mind. I should point out that Amelia is literally laying on top of him like a thunder blanket. This is a thing they do now. We should just accept it.

And then there’s Avery, who is remolding a three-year-old’s head. That’s right. He’s taking her current skull, removing it, and replacing it with a new one. The surgery is so significant that Korasick wants to film it for publicity. Oh, and he’s doing it pro bono. It’s called damage control and Avery needs to get on board.

Korasick makes sure the camera crew knows to get the parents while they are crying and praying and he even asks the father to reshoot his emotional interview with better lighting. Avery calls him out and Korasick is quick to remind him that he is Avery’s boss. And if he has a problem with it, Avery can call his mother to explain.

Avery takes a page out of Meredith’s book and goes rogue. He convinces the parents to do the surgery without the cameras and recruits Amelia to help him perform the surgery behind Korasick’s back.

Korasick bursts into the operating room (that seems safe) and starts popping off clauses from “the foundation.” Avery pushes back, “I am the foundation. I am your boss.” Mic drop.

For the next several minutes, we get a graphic, detailed, make-me-sick-to-my-stomach close up of Schmidt and Avery screwing the skull and sewing skin flaps back on the little girl’s head. I’m hopeful she’s going to be okay, but there’s one small detail that plagues me: Where is Schmidt’s catheter wire? The one he’s supposed to have on him at all times. So help me if it’s nestled in the cranium of a toddler. If that is the case, the guy should be fired.