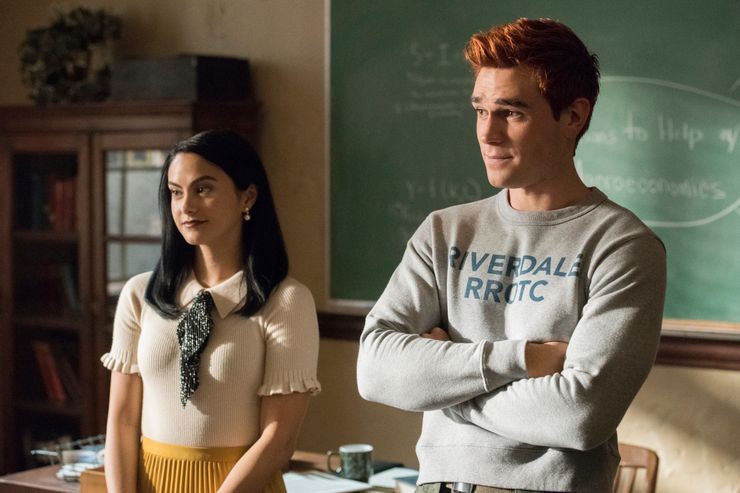 WARNING: The following contains spoilers for Season 5, Episode 6 of Riverdale, “Back to School,” which aired Wednesday on The CW.

The instant feedback loop of Internet-driven fandom has contributed to the media we consume becoming more and more self-referential and reflective. Television is no exception. Riverdale has, in the past, used couple ship names (Bughead) and even lampshaded its own shortcomings (ratings-nabbing faux lesbian kisses), but Season 5’s latest episode, “Back to School,” features perhaps the best nod-and-a-wink to the audience yet.

As set up in the previous one, Episode 6 features Archie, Jughead, Betty and Veronica returning to Riverdale High — this time, behind the teachers’ desks — to save their alma mater from being shut down. When members of Stonewall Prep’s thuggish football team ransack the school after dark, under the traitorous coach Reggie’s instruction, Archie is incentivized to restart his old team: the Bulldogs. However, he hits a number of hurdles. Finding enough willing players isn’t too hard, and he even goes down the inclusive route by allowing a girl to join, too, though she — and most of her male teammates — are lacking experience.

The biggest hindrance is funding. Archie needs to rustle up $20,000 to financially support the team and Toni, who is in charge of the school’s budget, is unwilling to divert what little money the institution has away from other projects. Instead, Archie pays a visit to the other wealthy women he knows — the shut-in Cheryl and the maritally-challenged Veronica. Eventually, the latter kicks her controlling husband to the curb to pump some Lodge cash into Archie’s endeavor, spurred on by her diehard Vixen loyalty from her own school days. But until then, Archie is left sulking in Pop’s, which is when Jughead offers a solution: “Well, if you promise to never bring up the ‘epic highs and lows of high school football’ again I can ask Tabitha [Pop’s’ owner] if she’s willing to sponsor the team.”

Jughead’s smirk and Archie’s withering expression are the icing on the cake of this self-parodying callback. The line originates from Season 3, Episode 2, in which Archie’s stint in jail found him rubbing shoulders with a rougher crowd than he was used to. In what can be, at best, described as extremely misguided and, at worst, horrifically privileged, Mr. Andrews advocates for unity by insisting if they weren’t all in prison together, they’d instead all be in school together trying out for sports. When one Ghoulie explains that not everyone has the fortune of being able to stay in school — topping it off with a sad admission that he had to “run drugs to support [his] Nana” — Archie counters, dismissively: “That means you haven’t known the epic highs and lows of high school football.”

The line was rightfully mocked to death on social media after the episode aired and lives on in infamy as Exhibit A of some of Riverdale’s most questionable dialogue. It’s nice to see, however, in Season 5, that the creators have a sense of humor about it, and seem to agree with viewers’ criticisms. The only niggling issue is the fact that Jughead wasn’t present when Archie delivered the line. It’s not so much a full plot hole but rather a plot… pothole? Perhaps the Ghoulies who did hear it had the same reactions fans did and word got around. And it actually makes it even funnier to assume that Archie’s teenage blunders would become hearsay in the town itself, returning to haunt him almost a decade later.

My name is Damyan Ivanov and i was born in 1998 in Varna, Bulgaria. Graduated high school in 2016 and since then i'm working on wordpress news websites.
Archie, Archie Andrews, Riverdale, TV Series