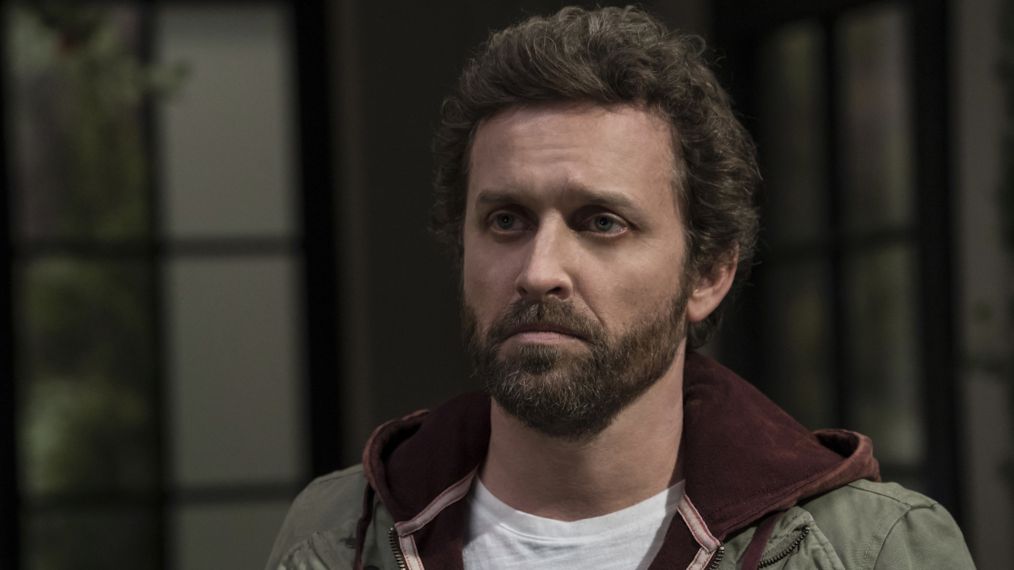 The first five minutes of tonight’s Supernatural are the best part of this episode, and not because the episode is bad, but because they’re great. Not only is it my favorite action sequence the show’s ever done, but overall, it might just be one of my favorite openings ever.

We start with a very rugged Dean Winchester — think: What Apocalypse World Dean would’ve looked like — fighting his way through the bunker, taking down demon after demon. He comes upon one of his fallen soldiers, and it’s Benny!!! But unfortunately, Benny doesn’t make it. Then again, neither does Dean.

As Dean rounds the corner, he finds Sam. Only, he’s not our Sam, not completely. He’s on demon blood. And according to his conversation with Dean, he did something terrible to Bobby and Jody. As Sam puts it, “They tried to stop me, but I will not be stopped.” (A brief aside to say that as much as it pains my heart to see Sam go dark, I also really really love it and Jared Padalecki is so great at it.)

Dean tries to convince his brother to fight the demon blood, but when another of Dean’s soldiers enters the room, Sam snaps his neck without a second thought. And then, as Dean begs him not to, Sam’s eyes go black and he snaps his brother’s neck. Now, everyone can calm down because it’s just a dream that Sam had. Except maybe we shouldn’t calm down because it could be a vision? And I have to say, I love the callback to “The End” when Dean saw a future where Samifer snapped his neck. As dark as this is, I’d love if the final season kept going down this road.

But back to reality, Sam wakes up and finds Dean eating “veggie bacon” in the kitchen, which leads us to this amazing brother interaction.

Sam: “But every time I ask for it [veggie bacon], you say, and I’m quoting, ‘I don’t want any of that hippie, Sarah McLachlan, grass eater crap in the Meat Man’s kitchen.’ Which, by the way, for what it’s worth, you gotta stop calling yourself the Meat Man. It doesn’t mean what you think it means.”
Dean: “Yeah it does.”

Dean’s come up with a plan to get his little brother out of the bunker, and it involves a bunch of cattle mutilations and one ripped up body in Iowa. “We need this,” Dean tells Sam just as Sam takes a bite of the “veggie bacon” to discover that it’s the real thing. “You’re damn right it is,” Dean yells before pointing at himself and declaring, “Meat man!” So there’s a GIF you never knew you needed in your life.

In Iowa, Sam is questioning the vice principal of Beaverdale High School about the murder victim when two parents, Mr. and Mrs. Whitman, show up and start asking why the lacrosse game has been rescheduled for a prayer vigil?! They have a scout coming to the game tonight for their son! (Talk about terrible priorities.) They claim that their son not getting into Yale would be the end of the world, at which point Sam reminds them that “The end of the world is the end of the world.” And doesn’t he know it?

Once Sam finishes with the vice principal, he reconnects with Dean, who found a vampire fang at the morgue. Now the question is: What kind of vampire dismembers its victims? The boys head to the spot where police found the body, and there’s no blood, which means the body was moved there. Apparently, the case has the local police royally freaked. While Dean takes a drink from a flask, Sam rants about how it’s their job to keep everyone else from dealing with the truth, how they have to carry the weight. Dean recalls a time when Sam wanted to live a normal life in a small town. “We don’t get normal,” Sam reminds him. These people clearly have no idea what’s out there if they think their kid not getting into Yale is the end of the world. (A truly timely story if I’ve ever heard one.)

When another high schooler goes missing, Dean gets some intel from Toby, the school mascot. Apparently, both victims were cheerleaders, so naturally, they suspect the next cheerleader in line to be captain. But when Veronica has braces — a surefire way to figure someone’s NOT a vamp — they check out some security footage that leads them to the doorstep of those truly terrible parents from earlier. And seeing as how they’re currently draining a young girl of her blood in their garage, I’d say Sam and Dean are in the right place.

But there’s more to the story: Although Sam and Dean suspect the father, it turns out the son — the Yale-bound lacrosse star — is the recently turned vamp. The first victim was his girlfriend. She died in what we’ll call a makeout session gone VERY wrong. The girl in the garage is the parents’ way to keep their son fed. Again, not the most impressive parents. Then again, they’ll do anything for their son. But he won’t let them.

Billy, the son, tells his parents to blame him for the kidnapping because he’s going on a little ride with Sam and Dean. As Jensen Ackles‘ song “Sounds of Someday” plays — a truly perfect fit for the moment — the boys take Billy out to the woods and end yet another monster.

They then climb back into the Impala where Dean tries to convince Sam that what they do still matters, that they do it for everyone they lost. “We owe it to anybody who has ever given a damn about us to keep putting one foot in front of the other, no matter what,” Dean says. And with Chuck gone, they’re finally free to move on.

But Sam’s not sure he can move on. In another pilot callback, he says, “Dean, I still think about Jessica. I can’t just let that go.” Right now, all Sam can feel is everything they lost. Maybe tomorrow will be better. But maybe it won’t. And that’s where we leave things.

BUT there’s more! Benny isn’t the only familiar face in the hour! We also catch up with Becky, Chuck’s ultimate fangirl, who now has a husband and two children. Well, really, Chuck catches up with Becky. He pays her a visit after Amara turned him away, and we find out that she makes Supernatural miniatures and runs the most successful Etsy site for unofficial Supernatural merchandise in the country (and maybe world). So yeah, I’d say she’s thriving.

She’s also started writing fan fiction because she realized that she wasn’t in love with the real Sam; she was in love with the character of Sam. So now, she writes stories that cut out the monsters and give fans what they really love: The guys sitting around and doing laundry. Chuck’s reaction to her hating on monsters? “Leviathans are cool! What?! They’re all teeth!” (This kind of metawriting is when I love this show most.)

Chuck updates her on his “falling out” with the Winchesters and basically asks her to give him an ego boost, but Becky likes herself now, and she no longer needs him! Chuck, having a real moment, says he kind of hates himself right now. He’s not sure what he’s doing. Becky’s suggestion? A writer has to write!

After a pep talk that makes me never want to procrastinate again — it won’t last — she convinces Chuck to write. Only, her talk is so good that he immediately sits down at her computer and whips up a draft of his next book. When Becky reads it, she tries to tell him she loves it, but he sees through it. He asks for “one note,” which leads to 20. She wants more jeopardy! The stakes are too low! This villain isn’t feeling very dangerous! There’s no classic rock! No one even mentions Cas! There’s no originality!

An angry Chuck then sits back down and declares, “I’ll give you danger.” Cut to Becky reading his rewrite and telling him “You can’t … it’s so dark.” Chuck can picture it now: Supernatural: The End and the cover is a gravestone that says “Winchester.” Becky tells him no, it’s awful, horrible, hopeless! “You can’t do this to the fans,” she says. “What you did to Dean, what you did to Sam!” But Chuck loves that it’s making her feel something. In fact, he loves writing at her house so much that when her family returns, he goes all Thanos and snaps them “away.” (They’re not dead, he says, just away.) Then, seconds after he drops the bomb on Becky that she DATED GOD, he does the same to her because Chuck … is a dangerous villain. He then ends the episode by saying, “Oh yeah, this is gonna be good,” which feels like another great kick-off into the final season.

Overall, I loved the Becky/Chuck stuff so much, and I’m wondering if what Chuck wrote is somehow linked to Sam’s dream. The two are connected thanks to their wounds, after all. So was what we witnessed at the start of the hour the ending he crafted in that room? And if so, is that where we’re headed?

One other thing I particularly enjoyed was the fact that THIS was the episode Ty Olsson returned for because, if you remember, his first episode, season 2’s “Bloodlust,” was the first episode where Sam and Dean had to ponder if all monsters were bad. (That was when he played a vamp named Eli, before the days of Benny.) In that hour, Sam and Dean came across a nest of vamps that didn’t feed on humans. And now, this episode sees a teen boy, a vampire, want to be good but accept that he can’t be. I don’t know that that was purposeful, but it felt like a full-circle moment.

Again, we’ve got another great set-up episode as we start building the mystery of how it all ends. Thankfully we have quite a few episodes to get there, but if where we’re headed is anything like that opening, we’ll need them all.