WARNING: The following contains spoilers for Supernatural Season 15, Episode 19, “Inherit the Earth,” which aired Thursday on The CW.
Endings are hard. Supernatural’s God, better known as Chuck, already told us that. For a show like Supernatural, sitting pretty on a record-breaking run of American genre television, the task of wrapping up what has become a beloved cult staple is all the harder. That’s why it’s not totally unsurprising that fans who tuned in to the penultimate episode on Thursday night may have felt a little like they’d seen this all somewhere before — particularly if they were familiar with the way Avatar: The Last Airbender’s Aang defeated Fire Lord Ozai.

On a deserted planet, Sam and Dean Winchester, along with Nephilim Jack Kline and Archangel Michael, still wearing the face of Sam and Dean’s younger half-brother Adam, drew the All-Mighty into one final trap. It was the boys’ riskiest gambit to date but, hey, what did they have left to lose but each other at that point? The lynchpin of their plan was trusting that Michael, still desperate for his father’s love, would betray them — something that a surprise return from Lucifer, of all people, helped them remember. They had Death’s book on God but without the Grim Reaper, no way of reading it. However, knowing that Micheal hadn’t seen the book’s pages (which are blank to everyone but Death) Sam pretended he’d translated a handful of Enochian symbols in it and figured out the recipe for a God-killing spell from the book’s ending.

Michael, predictable as ever, warns his father what the boys are up to, but when the spell activates and Chuck appears, the archangel isn’t welcomed back into the fold. Instead, Chuck smites him like he had every other living being on the planet, before turning his attention to Sam and Dean. Chuck thought the spell was intended to kill him; really, it was intended to lure him out. After opting to dirty his hands in a bloody fistfight with Sam and Dean, he implores them to give it a rest. But by then, it was too late. What Chuck failed to realize was that all of the prep his grandson had been doing to become strong enough to end him turned the kid into a cosmic sponge.

Every eruption of energy around him — from Michael and Lucifer’s clash in the Bunker to Chuck destroying Michael — was absorbed into Jack’s body. Now immune to God’s Thanos Snap, all the Nephilim had to do was physically drain the last of Chuck’s power away, which he did by placing his hands on either side of his head — visually evoking the way Aang energybended Ozai’s firebending out of him.

In The Last Airbender, another cult TV favorite, Avatar Aang’s pacifistic nature left him deeply conflicted about taking the dictator down. Killing the Fire Lord never sat right with the airbender, but a late-stage lesson from a Lion Turtle provided Aang with a more ethical solution than corporal punishment. Taking away Ozai’s firebending at the culmination of their confrontation left the Fire Nation’s ruler completely neutralized, having placed far too much reliance on the skill to keep himself in absolute power without it. Like Chuck, choosing to rule through fear made Ozai more vulnerable than he realized in the end. Had he chosen compassion, as his son did, he might have been followed willingly, and therefore, made all the more untouchable.

The sight of the once-great leader reduced to a sniveling, de-powered wreck at the end of The Last Airbender is echoed in Supernatural’s penultimate episode. Defeated and out of allies, Chuck asks the Winchesters to give him the death he deserves; they are hunters, after all, and “killing things” is the family business. This is true of Dean, in particular, who has long been driven by rage, something emphasized in the season’s recent episodes. It’s kind of the inverse of Aang’s struggle: where the young monk deplored violence, especially murder, Dean Winchester has often taken to it with a readiness that sometimes scares those around him. That’s why, in the Cain and Abel dynamic that their creator hoped to condemn the brothers to, Dean would have been destined to fulfill the role of the former.

However, neither Dean, Sam nor Jack, aka the new God, give Chuck the satisfaction of dying in a blaze of glory. Rather, just like Aang did to Ozai, the trio leaves the fallen villain to simply fade away naturally. “It’s the ending where you’re just like us, the ending when you grow old, get sick and die, and no one cares, or remembers you. You’re just forgotten.” 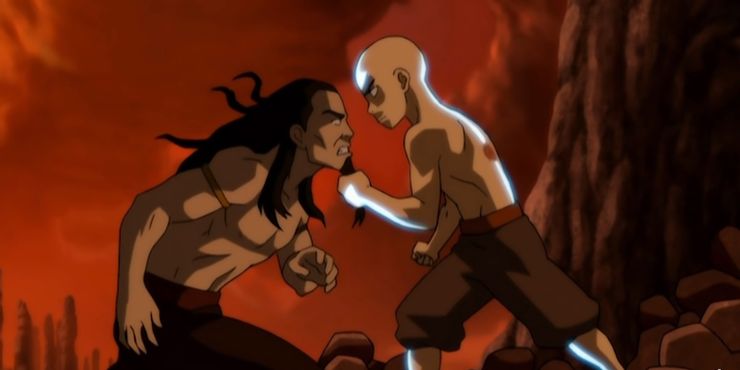 For Final Boss antagonists like Ozai and Chuck, who crave control, worship and submissiveness at the cost of love, companionship and loyalty, this kind of ending is the only satisfying one a story can give them, in which the stripping away of power and legacy is far more effective for the audience than taking away their lives. It also allows our heroes to exit the stage ‘clean.’ In The Last Airbender, Aang is able to finally restore balance to the world that his Avatar title demanded, while also keeping his heritage, integrity and beliefs in-tact. In Supernatural, Sam and Dean fulfill their duties as hunters by protecting humanity, but unlike Aang, they do so by breaking with tradition — finally winning their freedom by laying down their arms rather than using them.

Yes, the deja vu may rile those who prize originality above all else, but… does it really matter if it works? Supernatural may have, unintentionally or not, pulled some pages from a Nickelodeon kids show to fill its own at the end, but if you’re going to copy something, it’s always a good idea to copy from the best. The Last Airbender’s finale is one of television’s greatest, after all.

There really wasn’t any other way Supernatural could have concluded its God saga, either. Chuck needed to be punished in a more meaningful way than death; the world needed a new God; Jack needed a grander purpose for his miraculous existence and Sam and Dean needed, for once, to not kill something to win. Even if it might not be entirely original, that’s just what a hack writer like Chuck deserves anyway.